The Master of Laketown

Keep his authority over Lake-town.

Escape Laketown with his fortune and wealth before getting incinerated (both failed).

The Master is the original elected leader of Lake-town and he sees Bard the Bownman as threat to his authority on the town. He's greedy but intelligent and charismatic with a business acumen.

He is portrayed by Stephen Fry who has also portrayed Malvolio in Twelfth Night, Lord Piggot-Dunceby in Missing Link, General Melchett in Blackadder Goes Forth, Reaver in Fable and Arthur Wellesley in Blackadder.

In the book, he is very greedy, but he doesn't do any evil, and he's portrayed as a close companion to Bard, the captain of the town archers, allowing him to remain in Laketown while the Lakemen recovered from their ordeal with Smaug.

He is much more antagonistic in the movie adaptations, and is not honorable or respectable, shown as he tries to abandon the town with his gold and his guards. However, he also betrays Alfrid Lickspittle by pushing him off the boat, because all he cares about is the gold.

The Master's rule in Laketown was rather friendly, and therefore under his dominion the Men of the Long Lake traded peaceably with the Elves of Mirkwood, creating a steady trade that was kept until 2941, when Thorin and his friends came to wrest dominion of the Lonely Mountain and its riches from Smaug, who had arrived 120 years before the Master's rule, in the year TA 2770.

The Master of Laketown greeted the Dwarves generously, but only to keep public spirits up. After the destruction of Laketown and Smaug's death, the townspeople denounced the Master as a coward and wanted Bard as their King. The Master cleverly shifted blame for Laketown's destruction to Thorin and the Dwarves. This succeeded and turns the Lakemen against the Dwarves. Bard took the lead in rebuilding the remains of the town and gathering supplies for the coming winter, while being careful to act in the Master's name

After the Battle of Five Armies, Bard became King of Dale, but gave a generous portion of his share of the Lonely Mountain's treasure (received from Dain II Ironfoot) to the Master, for the re-building of Laketown. However, the Master succumbed to greed and fled Laketown with most of the gold, and later died of starvation in the wastes, after being deserted by his companions. He is therefore described as weak, because he is easily overcome by the lust of the treasure Smaug held, and by the dragon-spell.

The Master is a greedy corrupted official and thinks only about himself and his wealth and power, tolls and taxes. He's assisted by Alfrid Lickspittle.

He hates Bard and spies on him since he considered him as a threat to his authority. When he meets Thorin's company he considers the Dwarves as enemies of the state. But when Thorin promises a share in the riches of the Lonely Mountain, the Master is quick to welcome the Dwarves, seeing the situation as a chance not only to restore his ailing popularity, but also as a way of increasing his own wealth. Providing the Dwarves with weapons and equipment the Master bids them farewell, trusting to their gratitude upon the successful completion of their quest.

The Master sends his guards, led by captain Braga, to arrest Bard under fabricated charges.

Later Smaug attacks Esgaroth and the Master tries to escape with his gold, Alfrid, Braga and a few guards. However the boat was too slow and full of gold. The Master betrays Alfrid and throws him out into the lake and Bard uses his boat to free himself. When Smaug is killed by Bard his dead body falls on the boat, crushing the Master, Braga and the other guards. 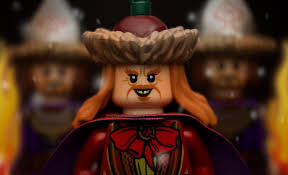 Lego Master of Laketown
Add a photo to this gallery

Retrieved from "https://villains.fandom.com/wiki/Master_of_Laketown?oldid=4089678"
Community content is available under CC-BY-SA unless otherwise noted.