The Master of the Monolith

Master and keeper of the Black Monolith

Presiding over the Black Stone.

Being worshiped as a god.

The Master of the Monolith is a monstrous and grotesque toad-like beast and the main antagonist of the Robert E. Howard's short story "The Black Stone". It was heavily inspired by the works of H.P. Lovecraft and it is truly eldritch in nature.

This ancient, hellish entity was worshipped as a god by a degenerate cult of Romanian origin within a village of Stregoicavar in the mountains of the European country of Hungary and it was an embodiment of all humanity's most horrible qualities such as greed, lust and malice.

Yet, the degenerate Hungarian mountain men who somehow discovered the entity and formed a cult surrounding it and worshiped it regardless and conducted many terrible rituals at its monolithic "altar" known as the Black Stone (which the creature stands on and it is it's own portal between dimensions) found in the clearing of a mountain, offering sacrifices and conducting horrible rituals to it on midsummer's nights. For an uncounted number of years, the savage people of the high mountains gave worship to the creature, crafting small idols in its image and creeping into the lowland villages to steal women and children to sacrifice; and likely would have continued, were it not for Turkish warriors come to the mountains to conquer the Hungarian people.

As recorded by the Turkish Warrior-Scribe Selim Bahadur and recounted by the narrator: "...and I read, too, of the lost, grim black cavern high in the hills where the horrified Turks hemmed a monstrous, bloated, wallowing toad-like being and slew it with flame and ancient steel blessed in old times by Muhammad, and with incantations that were old when Arabia was young. And even staunch old Selim's hand shook as he recorded the cataclysmic, earth-shaking death-howls of the monstrosity, which died not alone; for half-score of his slayers perished with him, in ways that Selim would not or could not describe."

By the far future in which the Narrator comes across the Monolith, The Master of the Monolith and its beastly worshipers have long turned to dust and sit in hell, never to return. But on one occasion, Midsummer's Night, it rises from the pits of hell to bask in the veneration of its worshipers, incorporeal yet undeniably there. As the narrator states, a ghost, worshiped by ghosts.

However, the entity was merely defeated (along with its cult) when Turkish warriors came and conquered the area. 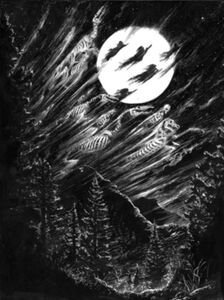 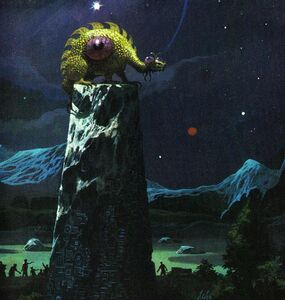 Retrieved from "https://villains.fandom.com/wiki/Master_of_the_Monolith?oldid=4278266"
Community content is available under CC-BY-SA unless otherwise noted.