Master of the World

The Master of the World

The Master of the World (real name: Eshu) is an immortal archenemy of Alpha Flight and a supervillain from Marvel comics.

40,000 years ago, during Earth's Ice Age, there was an Asian tribe was migrating south in search of a warmer climate. One of the tribe's members, a skilled fighter, continually demanded more food, clothing, and women for himself at the expense of the other tribe members. Finally, the tribe wearied of his behavior and drove him away to live alone in the harsh, frigid land by himself.

One day he fell under a hypnotic command to turn around and journey north again. He did so until he came to the source of the command, an immense starship. This was a colonization ship of the alien Plodex. The Plodex method of conquest was to send a colonization starship, containing no adult Plodex but millions of Plodex eggs, to a world whose dominant life form was in the early stages of cultural development. The starship would land in an inhospitable area, rebuild itself into a massive complex, and broadcast a hypnotic signal to cause the planet's native life forms to come to the ship. The most intelligent creature to survive the journey to the starship would be captured and analysed. The computer would imprint the chosen life form's genetic pattern on the millions of Plodex eggs and launch them all over the planet.

In this case, however, one of the starship's drive units had exploded, causing it to crash on Earth. Damaged in the crash, the starship launched all of its eggs before it had captured a specimen of the dominant native life form. Nevertheless, the starship still rebuilt itself into a colonization complex, broadcast the hypnotic signal, and captured the exile when he arrived. For days the exile's flesh, muscle, and tissue were peeled away and his bones pulverized as the complex studied him. The pain was so great that the still-living exile went insane. Only his brain was kept alive by the starship, which incorporated it into its computer matrix.

But over the next 30,000 years the brain overcame its insanity and took control of the starship's entire computer system. Finally, he constructed a new, perfect human body for himself. After ten thousand years of mastery of the starship and the knowledge it gave him, the former exile, now styling himself the Master of the World, was ready to embark on his mission of conquest.

The Master of the World is approximately 40,000 years old. After he was experimented on by the Plodex ship, he underwent the reconstruction of his entire body (except for his brain) by Plodex technology, granting him superhuman powers. The master has the agility beyond that of a normal human, which he gained after he altered his body. He has enhanced reflexes, that were fast enough to slice Warbird with a sword. His speed can reach 61- 65 mph (105 km/h). His stamina is so high that he can sustain peak physical exertion for several hours before fatigue impairs performance. Also, his strength is enhanced, and he was able to break Sasquatch's arm by, after dodging Sasquatch's attack, grabbing it with both hands and breaking it. He is also a master of hand to hand combat, as he learned the techniques 40,000 years ago, retaining his knowledge of hand-to-hand combat from his days as a tribal warrior. He knows all human pressure points, which was shown when he knocked out Namor the Sub-Mariner with a single punch. The Master is virtually immortal, having lived for 40,000 years; although not invulnerable, he ages at a very slow rate. The Master was once mentally integrated with his Plodex starship base, so that he was physically unable to leave it until it was destroyed in a conflict with Alpha Flight. He then underwent further reconstruction of his entire body by a mutagenic fluid concocted from the remains of Scramble the Mixed-Up Man.

His suit also has many benefits, allowing him teleportation and flight. His helmet and battlesuit are composed of an unknown metal, including cybernetic mesh enabling the Master to control Plodex technology through mental commands. Devices within the Master’s helmet and battlesuit enable him to cast illusions disguising his appearance. He is able to create a force field that can ward off attacks. Also, he is able to shoot energy blasts with his suit, and it enables him to disperse electromagnetism, which was shown when he was able to control Guardian I's suit. The Master designed this battlesuit using his knowledge of Plodex technology. He is self-educated in all recorded knowledge of Earth humanity up to the present, and of the alien Plodex (as of 40,000 years ago) through mental linkage with computers in the starship base. He has utilized various skycraft and underwater craft. 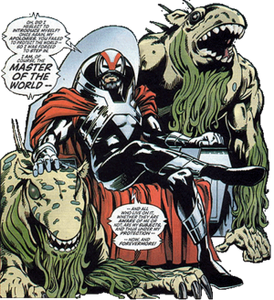 The Master of the World sitting on his throne and surrounded by his monstrous pets.
Community content is available under CC-BY-SA unless otherwise noted.
Advertisement