Get her hands on her uncle's inventions.

The Mastermind, persona adopted by Holly Graham, is the main antagonist of the 2002 videogame Scooby Doo! Night of 100 Frights. She is the former friend of Daphne Blake who attempted to use her and the rest of Mystery Inc. to frame her uncle in order to sell his hologram machine in her name.

She was voiced by Grey Delisle Griffin (who also voiced Mandy in The Grim Adventures of Billy & Mandy, Vicky in The Fairly OddParents, High Priestess in Samurai Jack, Azula in Avatar: The Last Airbender, Asajj Ventress in Star Wars: Clone Wars, and Catwoman in the Batman: Arkham series), who is also Daphne's current voice talent.

As the Mastermind, she was voiced by Tim Curry, who also portrayed Frank-N-Furter in The Rocky Horror Picture Show, Pennywise in the It miniseries, and voiced Ben Ravencroft in Scooby-Doo and the Witch's Ghost and Emperor Palpatine in Star Wars: The Clone Wars.

The Mastermind is an evil phantom who lives in and haunts a mansion called Mystic Manor. He brings Scooby-Doo and his friends there, having brought back 20 of their old foes who are all classic monsters from episodes of Scooby-Doo! Where Are You?, The New Scooby-Doo Movies and The Scooby-Doo Show:

Daphne Blake's old friend Holly Graham invites her, Fred Jones, Velma Dinkley, Shaggy Rogers and Scooby-Doo to Mystic Manor because her uncle, inventor Professor Alexander Graham, has disappeared while working on his latest invention and she needs the gang to help find him. Fred, Daphne and Velma go inside Mystic Manor with Holly Graham while Shaggy and Scooby wait outside. After Shaggy disappears, Scooby enters Mystic Manor to ask Fred and the girls to help find him. Once inside, Scooby only finds Holly, who tells him that somebody called The Mastermind took Fred, Daphne, and Velma. Scooby then heads out to rescue his friends. Holly gives him a map can help him around Mystic Manor and the areas around it.

After Scooby makes his way to the Mystic Manor rooftops, having endured encounters with monsters from his past—like the Zombie and the Headless Specter—Holly greets him in her mastermind costume and mask. She tells Scooby that she is the one who brought him and the gang to Mystic Manor, the one behind Professor Graham's disappearance, that she brought some monsters back from his past and that \she kidnapped all his friends, and points to Velma who is locked in a wooden cage nearby. The Mastermind then disappears and leaves Scooby to battle the Black Knight Ghost. After Scooby defeats the Black Knight, he frees Velma, who loses her glasses, and tells her that he saw a spooky groundskeeper and ghosts and monsters on his way to her. Scooby helps Velma her glasses but when she put them on, she thinks she sees the Creeper and runs off. However, Scooby doesn't see the Creeper anywhere and goes to find the rest of the gang.

Scooby later encounters Holly in her Mastermind disguise again in the graveyard where she is carrying Daphne away. Scooby manages to rescue Daphne, however, the Mastermind summons the Phantom Shadow to attack them and then disappears again. After Scooby and Daphne defeat the Phantom Shadow, Holly shows up (without her Mastermind costume) and tells them she found some of her uncle inventions and that he usually keeps them in a secret lab. Scooby finds an umbrella in the crate. Holly says it's a more useful invention. Holly and Daphne then disappear and Scooby goes to find Fred.

Later, Scooby finds Fred on a pirate ship, however, Holly appears in her Mastermind outfit once again and traps Fred under a barrel and summons the Ghost of Redbeard to battle Scooby afterwards. After Scooby defeats Redbeard, he frees Fred and then Velma arrives, still running from the Creeper. Then Fred looks at her glasses and says that somebody has placed images of the Creeper on the lenses. At that same moment, Shaggy arrives on the pirate ship. Fred and Velma decide to go look for Daphne and Holly. Scooby suggests they go find the secret lab that Holly mentioned. He and Shaggy go there with after being frightened by the Ghost of Captain Cutler.

Finally, after Scooby makes it to the Secret Lab and reunites with all his friends, along with Holly (who is really just a hologram), they learn that Holly's uncle was making a machine that can create super realistic holograms and that all the monsters the Mastermind summoned are holograms. They then make a plan to catch the Mastermind. Scooby locates Holly in her Mastermind suit and he prepares to battle him/her along with Charlie the Funland Robot and the Space Kook.

After Scooby defeats the Mastermind, the evil phantom is taken back to the first room of Mystic Manor. The gang and "Holly" arrive there and surround the Mastermind. Before the gang unmasks him, Shaggy suggests it's the groundskeeper but the groundskeeper enters the room and tells Shaggy off. Fred then removes the Mastermind's mask and he is revealed to be Professor Graham. Suddenly, Velma soon discovers Holly behind a wall in Mystic Manor. Shaggy is confused and reaches for Holly and goes right through her. Velma states that Holly was a hologram and the real Holly was actually the Mastermind the whole time. Holly confesses that she had schemed the whole plan and that she wanted Mystery Inc. to come to the Mystic Manor, uncover her uncle as the mastermind and have him taken to jail so she could get rich off of his invention. She set holograms of herself everywhere the mastermind was so she would have an alibi. 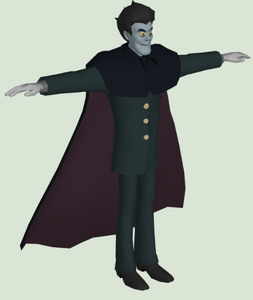