Legacy Supervillains
The Masters of Evil are a group of villains in Marvel Comics, often found fighting the Avengers.

It was started by Baron Zemo to combat the Avengers. It serves as the collective archenemy of the Avengers team sharing the role alongside Kang the Conqueror and Ultron, the latter whom also led the second version of the Masters of Evil. Baron Zemo II who is the son of the original Zemo serves as the most prominent member of the group as he appeared as the leader in most incarnations.

The original version of the Masters of Evil was assembled by Heinrich Zemo in order to get revenge on Captain America and defeat his new allies the Avengers. Zemo gathered together Iron Man, Thor and Giant Man/Wasp's respective enemies Melter, Radioactive Man and Black Knight, and sent them against the Avengers, also covering New York in the same Adhesive X that had permanently grafted Zemo's mask to his face. With the help of Paste-Pot Pete, the Avengers find a cure to the Adhesive and trick the Masters into spreading it, before capturing all except Zemo.

Joined by Enchantress and Executioner, Zemo lead the Masters again in another plot to destroy the Avengers. Enchantress hypnotized Thor into attacking his allies while Captain America is lured to South America to fight Zemo. Iron Man manages to undo Enchantresses brainwashing and Captain America defeats Zemo before using the latter's helicopter to fly back to and help his allies. Enchantress casts a spell that transports the helicopter to the roof she and Executioner are standing on and, after knocking out Captain America, the Masters board the helicopter in an attempt to escape. However, Thor generates a space war to send the villains to another dimension.

Not long afterwards, Enchantress uses a spell to warp herself and the other Masters out of their dimensional prison, and they then blackmail the newly powered Simon Williams into fighting the Avengers by telling him he will die in less than a week unless Zemo gives him a cure. Williams kidnaps Wasp and fights the Avengers as the Masters planned, although he decides to sacrifice himself to save them. Later, Immortus offers to help the Masters and transports Captain America back in time to the Tower of London in 1760. As this occurs, the Masters attack the Avengers, only for Captain America to manage to return. Sensing defeat, Enchantress decides to transport herself and the other Masters back in time to before they encountered Immortus.

Later on, Zemo kidnaps Rick Jones while Enchantress and Executioner free Melter and Black Knight from prison. The Masters battle the Avengers while Captain America is forced to enter Zemo's kingdom and rescue Rick by himself. Captain America manages to blind Zemo using his sheild, causing him to fire wildly and accidentally trigger a rockslide, killing him. Meanwhile, Executioner tells the Avengers that their battle will endanger many people, meaning they should surrender. To get around this, Thor defeats Melter and Black Knight by sending them to a dimension with different scientific laws, meaning their weapons rebound on themselves, while Enchantress and Executioner escape before this happens.

Masters of Evil I

This was the version that became the Thunderbolts:

This group was later made part of the Army of Evil during HYDRA's rise to power during the Secret Empire storyline:

Baron Zemo, original founder and leader of the Masters of Evil. 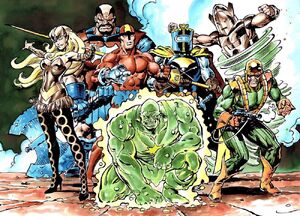 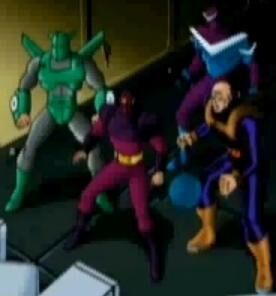 The Masters of Evil in The Avengers: United They Stand. 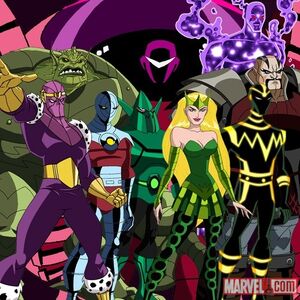 The Masters of Evil in The Avengers: Earth's Mightiest Heroes. 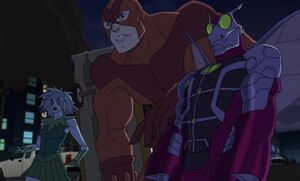 The Masters of Evil in Avengers: Ultron Revolution.
Add a photo to this gallery

Retrieved from "https://villains.fandom.com/wiki/Masters_of_Evil?oldid=4148070"
Community content is available under CC-BY-SA unless otherwise noted.