Pretend to have a fake boyfriend.

Masuzu Natsukawa (夏川 真涼 Natsukawa Masuzu) is a first year high school student. She spent nine years overseas. She is popular at school and is constantly confessed to by the males in the school which made the girls of the school jealous. She, like Eita, hates romance and love. She claimed that she loves Eita all along since he wasn't charmed by her looks. Natsukawa blackmailed Eita so she can be his "girlfriend" so the boys from the school would stop confessing to her. When she isn't together with Eita, she is bold and cold, but when she is, she acts more evil and very devious, and loves to use words to trick him. One of her antics is reading Eita's notebook of fantasy that is filled with embarrassing things out loud in front of him, often with Chiwa and/or Hime around, causing Eita to squirming around in embarrassment. Although she just used Eita to form a faux relationship in the beginning, she eventually grew genuine feelings for him without actually realizing it.

Natsukawa has long silver hair and blue eyes and is constantly confessed to by the males in the school but always turns them down. She hates romance and men. She can be evil and mischievous outside of the school. She forced Eita to be her boyfriend by threatening to leak his diary secrets onto the Internet. She likes to quote scenes from the manga JoJo's Bizarre Adventure. Her twisted personality is caused by her family problems which also caused her to hate anything about 'love'.

She spent nine years overseas. Her family was situated in Sweden and she also has a complicated relationship especially with her father which particularly accounts for her twisted personality. She was known as the jewel of the Natsukawa family and was used as a tool and accessory by her father to show off to his high society after taking her away from her mother. She has always waiting for her mother to come back. 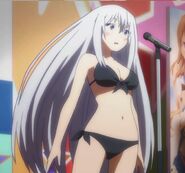 Add a photo to this gallery
Retrieved from "https://villains.fandom.com/wiki/Masuzu_Natsukawa?oldid=3550402"
Community content is available under CC-BY-SA unless otherwise noted.