Ghoul Leader of the 6th Ward

Member of the Aogiri Tree (both formerly)
Associate of Yoshimura

Track down and find Akihiro Kanou.

Join the Aogiri Tree by Yoshimura's command.
Break away from Aogiri (all succeeded).
Currently live life to the greatest.
Escape the clutches of V and the Aogiri Tree (both failed).

Matasaka Kamishiro (神代 叉栄, Kamishiro Matasaka) is a minor antagonist of the supernatural dark fantasy series Tokyo Ghoul. He is a ghoul from the 6th Ward and was the leader of the ward until he was captured by the C.C.G. and imprisoned. Upon his release, he ended up joining the Aogiri Tree following their assault on the Cochlea compound by orders from Yoshimura.

He was voiced by Kiyoyuki Yanada in Japanese and Andrew Chandler in English.

Shachi is a very tall, bulky, and extremely muscular man. He has long black hair with a long, whispy black mustache and thick eyebrows. He is shirtless and shows off his body muscles and wears black pants. He often expresses a rather terrifying appearance when he's seen. After the timeskip, he appears to have grown a rather large beard that covers the entire lower half of his face and gives him a messy look.

Shachi is rather unique as compared to other Aogiri Members due to his personality as compared to others. He is a calm, peaceful, trustworthy, and sagacious ghoul who holds great power but never fully uses it. He often avoids killing people and always leaves his opponents alive. He is also the most humble member of the Aogiri Tree because of his actions, but the exact reasons remain unknown.

His wise, honorable, and straightforward personality has resulting in Tatara calling him "soft", and has a habit of yelling out single-worded phrases very often when in battle, which are often confusing especially for the ones with a deeper meaning behind them. Unlike other Aogiri Members, Shachi is actually compassionate and respectful towards Humans, or at least the martial arts they've developed as he is constantly studying them. He strives to live life to the greatest and sees little difference between the human and ghoul species.

Sometime in Shachi's life, he was raised by a mysterious human mentor Kamishiro who was also his foster father. He eventually developed an honorable and nonviolent morality and he refused to kill humans. He eventually came across a young ghoul named Rize who was tired and exhausted from fleeing from the mysterious organization known as V and decided to take her in an adopt her. Shachi grew up and raised Rize in the 6th Ward but she began to cause trouble with her feeding habits and eventually, the CCG caught her attention and raided the 6th Ward where Shachi was captured in the aftermath.

Sometime during and after the 11th Ward Battle, the Aogiri Tree had launched an attack in the 23rd Ward against Cochlea with the intent of freeing the thousands of ghouls in there to increase their memebrship for the newly formed organization. Shachi was freed during the raid along with thousands and ended up joining the Aogiri Tree afterwards. In the Root A anime, Shachi had ran into Kaneki, an Aogiri Executive, and fought him only to beat him in battle and he was then convinced to join Aogiri when Eto flew down from the upper levels after the fight between him and Kaneki and promised him that he would meet up with Rize again.

Shachi first appears in chapter 90 of the original manga where he and a group of ghouls from Aogiri run into Kaneki's Group who are searching for the nurse that worked with Akihiro Kanou, Taguchi. The two groups then engage in a fight and Shachi and Kaneki begin to fight as well. Shachi had managed to defeat Kaneki and he then yelled out how Kaneki will never be able to defeat the Aogiri Tree with his current level of strength. Shachi then leaves and he manages to meet up with Naki and they have successfully captured Taguchi and he then takes out a cellphone and calls someone (most likely an Aogiri commander) and tells them about Kaneki's Group, the group that they were warned they'd run into, and aksed if they should kill them.

Shachi then appears later on at Kanou's laboratory where he confronts Kaneki for a second time and fights him again. This time however, they are at a more equal standing point and Kaneki notes on how Shachi isn't that weak and that he's obviously holding back his true power. Believing that Shachi is underestimating him, Kaneki gets enraged and thrashes out at him in full force only to have Kaneki get caught by Shachi and he then throws him around and deals heavy damage to him. Kaneki then sees that he delt no damage to Shachi as he revelas himself to be unscathed and the two then fight into the inner laboratory when Kanou is on a balcony with Shachi and he then tries to convince Kaneki to join him and Aogiri only to have Yomo interrupt and Shachi carry Kanou away in a rescue.

Shachi makes a brief appearance in the aftermath of the Antieku Raid where he is on a building rootop thinking about what to do next. He's seen checking his phone where he's currently a member of the Aogiri Tree and appears to be influencing Ayato Kirishima as if he was his master. Later on, Shachi appears where he's visiting Nishiki and Yomo who had been watching and taking care of Rize per his agreement with Yoshimura. Shachi then informed that two that Yoshimura was captured by his daughter, Eto, and that they should rid of Rize so that they don't get hurt and then leaves shortly after. Nishiki asked why he even still cares for Rize to which he responds that it is a stupid question and that it is his duty as a parent to care for her.

Two years have past and Shachi is seen remaining alive and well. Within the past two years, he's grown a full beard that covers the lower-half of his face and appears to have defected from the Aogiri Tree and is now on the run. He is first seen in Tokyo Ghoul:re, where he is on the run from Investigator Kishou Arima of the CCG who has been tracking him down and trying to kill him by orders of V. He is then seen during a chase where Arima is persuing him with a small squad of other investigators to which Shachi breaks a bridge connecting them only to have Arima swoop in and the two begin fighting. During the fight, Shachi notices a weak spot in his attacks and tries to exploite it only to have Arima dodge and and stab his left eye and then stab his throat and finish him off with one shot. Shachi falls onto the floor coughing up blood and compliments Arima for having "such eyes" and calls on Rize to run. 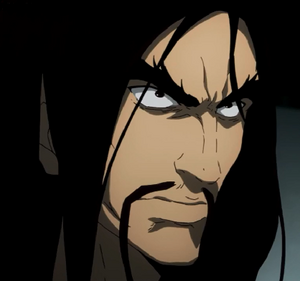 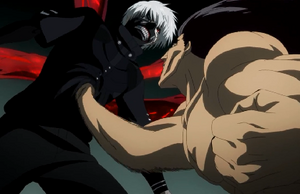 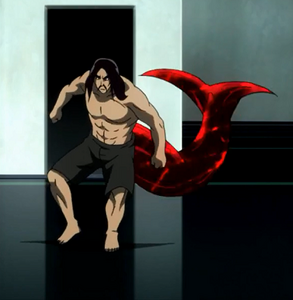 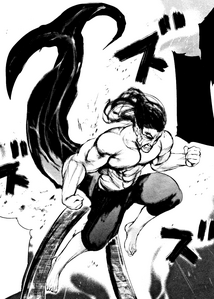 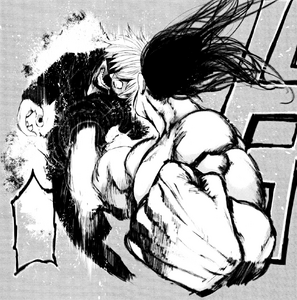 Shachi uppercutting Kaneki during his search for Kanou