Continue his predecessor's work of trying to make the rest of the world fall beneath Corto Maltese via fear.

Major General (later General Presidente) Mateo Suarez is a major antagonist in the 2021 film The Suicide Squad, the tenth installment of the DC Extended Universe.

He was the major general of the Corto Maltese Armed Forces and an ally to Silvio Luna and The Thinker and one of the major overseers in the development of the latter's research into something known only as Project Starfish. He later took over his former boss and friend Luna's role as General Presidente following the latter's death at the hands of Harley Quinn. Like his predecessor Suarez wanted to expand the influence of his home and force other places of the world into submission via fear.

He was portrayed by Joaquín Cosío, who also played General Medrano in Quantum of Solace and Scorpion in Spider-Man: Into the Spider-Verse.

Mateo Suarez helped Silvio Luna to make an attempt against the Herrera family to take control of Corto Maltese. When Luna rose to become dictator of Corto Maltese, Suarez became his right-hand man, earning the title of mayor general and leading the Corto Maltese Armed Forces as part of his tyrannical reign of terror. During their first days in office, Suarez and Luna would assassinate the entire family of Sol Soria.

While Task Force X infiltrated Corto Maltese, Luna contacted the scientist Gaius Grieves, alias "The Thinker", who worked with the Herrera family, to discuss the Project Starfish. At the meeting, Suarez mocked Thinker's brain, so Thinker responded ironically, making Suarez angry, Luna stopped Mateo telling him to behave. Thinker continued explaining the Project and its history with videos of his meeting with NASA, finally Thinker told them that the creature was hidden in Jotunheim. Suarez accompanied the soldiers and Thinker to see the creature that remained hidden to take possesion on it, until Luna retired to meet Harley Quinn.

Luna would be assassinated by Harley Quinn after the president confessed her sinister agenda. After the murder, Quinn would be quickly detained by the soldiers and sent to a torture chamber. Vera would break the news to Suarez, telling him that the generals agreed that he should assume power, while Suarez would then decide to kill Silvio Luna's birds by lighting it on fire.

Suarez would visit the torture chamber in which Quinn was, asking her multiple times how many metahumans the Americans had sent on the mission, at one point Quinn would answer 69, so Suarez would be surprised until Harley made a mocking laugh, then Suarez told his assistant to continue electrocuting her until she apparently fainted, so Suarez left the place asking the assistant to keep an eye on her.

Upon arrival, Suarez and his troops tried to stop Task Force X, however they then observed how the base exploded and Starro was released, while he began to release multiple spores that began to control the Armed Forces, Suarez sadly watched his whole army around him assimilated knowing that his last moments arrived and his conquest plans failed until finally a spore reached him, killing him. Starro used Suarez's body to communicate to Task Force X twice: the first time when he say that Corto Maltese belongs to it and the second when professed that it was happy when it was floating aimlessly in space and admiring the stars before being captured by the astronauts. Starro would finish dying, so Suarez's body and the other infected would fall to the ground.

Suarez is a rather no nonsense and ruthless man willing to take whatever measures necessary to get what he needs and had a lot of pride for his home as well a strive for power, wanting to expand its influence and force other places into the world into submission via fear. Although he did get along with his predecessor and former boss Luna and viewed him as a friend, he was very critical over some aspects of his life and his sentimental and romantic behaviors which he commented on following the latter's death at the hands of Harley Quinn, as well as his interests such as his love for keeping exotic birds which he thought would mean they could never be taken seriously as leaders. Also, although on the same side as The Thinker, he didn't get along with him and it's implied the two argued quite frequently over their opposing work methods and clashing personalities.

Suarez was an aging gentleman in his fifties with a stocky build, tanned skin and neatly slicked back silver hair as well as a short beard. He was almost always seen in his military uniform; camouflage combat fatigues with a few badges and medals scattered across it paired alongside a matching hat, several ammunition belts and a pair of black boots, he also wore his formal military attire on some occasions throughout the film as well in promotional materials. 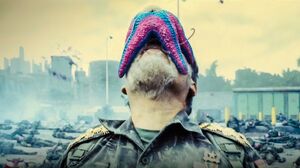