Fading of the Cries

Ruling over the dead.

Rule the Earth with legions of the living dead.

Mathias is a malicious necromancer and the main antagonist of the 2011 fantasy/horror film Fading of the Cries. Mathias is a power-mad and cold-blooded 15th century Necromancer who seeks to control the world of the living with an army of the undead. He wields a black cane-like sceptre with a diamond-like silver top that turn into a sword and he is aided by three demons known as Malyhne, Sylathus, and Thurah who are his guardians.

He was portrayed by Brad Dourif, who also played Chucky in the Child's Play film franchise, and the Gemini Killer in The Exorcist III: Legion.

What is known about Mathias is that he once lived in a small farmland town during the times of colonial America and had a wife who, sadly died with their unborn child. Appearingly she was murdered. He learned the ways of sorcery and found the power of resurrection through the art of necromancy to bring back his beloved. His attempt at making her rebirth possible was actually successful when word spread around of his witchcraft. The elders of the town's local church came and caused Mathias to watch his wife die twice. For so long, he kept a journal with writings that is not some events of his life and the mysteries of the occult, but also tends to be bizarre and distorted as he went into a rage, cursing the town elders and threatens to raise the dead. His own journal speaks of demonology and mysticism—raising the dead and the containment of evil through symbols. Three demonic entities that act as guardians were summoned from the netherworld through witchcraft to protect Mathias, and to carry out his vengeance against the town and its elders. The journal that kept all the "black writings" was buried in his abandoned mansion near the town called Eckly Manor. Mathias and his supernatural bodyguards later disappeared and were never heard from again.

Centuries later, at the Eckly Manor, ouside of town, an author named Michael who lost his wife and daughter in a tragic accident, moved in and discovered the secrets within the house but sensed that something ominous was within the manor, watching him. After he learned witchcraft and succeeded in killing his family's murderer, the 2 demons Michael has summoned have turned on him and he tried using magic he learned from a lost journal to undo his mistake. All of the sudden, the sorcerer Mathias appeared and attacked Michael. Than one of his demons, Sylathus, attacked and killed Michael. Mathias ordered that he needed to sacrifice him in order to summon his another slave, Thurah.

When the forces of darkness beset a small farming community and its citizens were suddenly transformed into undead zombies, a young man named Jacob takes up his mighty sword to protect an innocent girl by the name Sarah and prevent her antique necklace, an amulet known as the Rune of Seralean from falling into the hands of a diabolical tyrant, a necromancer named Mathias who is responsible for this supernatural siege. He covets the necklace given to Sarah by her uncle Michael before his death. But Jacob is determined to protect Sarah. After escaping from the hoard of reanimated dead through the floor of a church, Sarah meets Mathias who says the amulet was originally inherited to him alone and Michael was the thief who stole it, thus causing Mathias to curse all of his family including Sarah and her loved ones. Sarah refuses to give him the amulet, and after threatening to unleash all the evils he can conjure, Mathias disappears. Sarah and Jacob are then forced to flee once again and after crossing a bridge they take refuge for the night and wait until morning to continue their journey. They then set out to get to Sarah's house safely the entire time traveling through streets, fields, churches and underground tunnels and being pursued by hordes of demonic creatures. As the young pair is beset by demons,  Sarah uncovers a secret that causes her to reconsider her animosity toward her sister and their mother.

After arriving at Sarah's home around midday, Jacob and Sarah arrive to find that Mathias has arrived before them and is holding a sword to Jill's throat as he takes Sarah's little sister hostage while their mother lies unconscious on the floor. Mathias offers Sarah the choice of watching her sister die or handing over the amulet. Sarah decides to hand over the amulet on the condition that Mathias let Jill go free. Mathias promises he will do so. After handing him the amulet Mathias breaks his promise and disappears with both Jill and the necklace. Sarah then begs Jacob to go save Jill from Mathias and Jacob reluctantly agrees. Later, as the demons close in on Jacob and Sarah, the young hero realizes he must return to the place where his life was destroyed in order to defeat Mathias once and for all.

After arriving at Sarah's dead uncle's house, Jacob then has a confrontation with Mathias that ends with him destroying the amulet and saving Jill by diving through a hole in the floor and breaking their fall with his own body. At this point you find out that Jacob is unable to die due to a protection spell that Sarah's uncle cast before he died. Upon returning home however Jill and Jacob discover Sarah and Jill and Sarah's mother dead, having been killed when Jacob was not there to protect them.

In the end, Jacob then leaves and returns to Eckly Manor where he finds the weakended Mathias reading through his necromancer spells in his lost journal, looking for a way to restore his power. He spots Jacob walking towards him and starts laughing saying that it is impossible for Jacob to kill him due to the fact that he is already dead. Jacob approaches him and says that instead of killing him he will torture Mathias for all eternity and it fades out with Jacob repeatedly slashing Mathias with his sword and the sounds of Mathias's screams fills the air.

Mathias is a powerful sorcerer who is skilled in the ways of dark magic.

He mastered the art of necromancy to resurrect the dead and also control them at will.

He can summon swarms of bats and crows to darken the skies or surround his enemies with his cane-like sceptre with a diamond on top of it. He can disappear into a mist of vapor, that along with any of his servants and those he taken prisoner.

Mathias can only summon and control the dead at night. But when with the Rune of Seralean in his possession, he becomes even more powerful with his sorcery increased considerably and can permanently turn day into night by darken the skies at will, thus making him an extremely dangerous man.

Mathias reveals the fact he was already dead but because of his magical powers, he came back from the dead as an immortal and could never die. That fact however did not distract Jacob from enacting his retribution on the sorcerer.

Mathias appeared before Sarah and threatens the girl to surrender the Rune of Seralean. 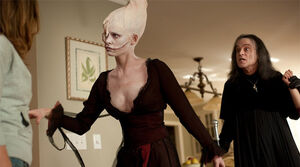 Malyhne and her master, Mathias.