Deceiving and hunting down Lara.

Kill Richard for leaving him on the island of Yamatai.

Find the tomb for Trinity so that he could leave the isle and reunite with his family (both failed).

Mathias Vogel is the main antagonist of the 2018 action film Tomb Raider, based on the video games. He is a treasure hunter who serves as a member of Trinity.

He was portrayed by Walton Goggins, who also played Shane Vendrell in The Shield, Stans in Predators, Billy Crash in Django Unchained, El Cameleón in Machete Kills, Lee Russell in Vice Principals and Sonny Burch in Ant-Man and the Wasp.

Vogel is shown to be rude, psychopathic, and determined to do his own thing. However, his motivation behind it was that he wanted to see his family after seven years of being in Yamatai, as well as his madness to find Himiko, which made him a man who did not care about anything except for getting out of that island.

Vogel started out working for Trinity and began inspecting the island of Yamatai. He came across his rival Richard and supposedly killed him, but was unaware that Richard escaped and gave false leads so that Richard and his men could never find Himiko's tomb. He also forced many slaves to help him find the tomb. These slaves consisted of shipwrecked sailors, or people who paid smugglers for a better life, but the smugglers brought them to Yamatai instead.

After arriving at the island after the incident with the boat, the men of Vogel find Lara and take her to him, the next day he is waiting for Lara to wake up and tells him about what he did there.

After a conversation with Lara this reveals that she had brought him what he needed to find the tomb of Himiko, Vogel worked with slaves and his men to find the location of this and give it to Trinity an organization that seeks paranormal secrets, Vogel realizes about that they were looking in the wrong area and decided to move the camp to finally the area and exact location of the grave.

During the excavation of the area one of the slaves gets sick and Vogel without remedying words shoots him in front of Lara and Lu, later pointing and realizing how crazy and psychopathic this was, thus planning an escape which is successful for Lara but during this one, Lu is hurt by a shot in the shoulder by Vogel.

After the encounter of the Tomb, Vogel is attacked by Lara Croft and Lu Wu in an attempt to escape, this intent to confront them realizes that the Father of Lara goes to the tomb which was found to decipher and goes up to confront him, telling her that if she does not open it, she will kill him, Lara appears and, in order not to see her father die, she negotiates with him to open the tomb and that she would take her to Hamiko, once inside they go through a lot of traps which they are designed to prevent the departure of Himiko until finally finding the Tomb of the Goddess of Japanese death.

Lara, his father next to the men of Vogel and this same one warns him about the danger that this could contain, Vogel tells him that he does not have to fear about an old woman and forcing his men to open it, once opened is the body of is in a state of decomposition, Vogel says that there was nothing to fear and had to take that tomb to Trinity, at that time one of the men of Vogel has an infection which begins to take over the turning into a kind of zombie killing to one of them and when attacking Volge, this shoots him killing him, in it he realizes that Himiko is a mortal disease which can cause a genocide and takes a small sample of it to take it.

While extracting the sample, Lara's father and she attack Vogel and his men, Vogel is wounded in one of his legs trying to escape and has a confrontation against Lara's father, who is wounded and attacked by one of Vogel's men who was infected, Vogel begins to flee with the sample, until reaching the abyss of souls, and when he passed the stairs he is intercepted by Lara, who tells him that he will fulfill the promise to his father not to let him leave.

Vogel begins to fight body to body against Lara in a brutal fight, when he is almost subdued by this one, he gives him a blow and manages to take Lara's ax, keeping her on the floor and ready to kill her he tells her to send greetings to his Father when she see it, Lara's father committing suicide by detonating the explosive charges causes a tremor in the cave which distracts Vogel.

At that moment Lara takes advantage and hits him leaving him wounded, Vogel tries to hit Lara but she attacks him and takes the sample of Himiko and he puts it in Vogel's mouth infecting him, Lara tells him that he messed with the wrong family and kicks him into the abyss of souls, Vogel falls to his death and becomes one of the thousands of dead bodies that were there. 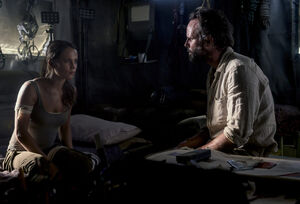 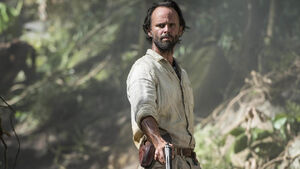