Villains Wiki
Register
Don't have an account?
Sign In
Advertisement
in: Female, Doctor Who Villains, Science Fiction Villains,
and 22 more

Leader of the Sisters of Plentitude

Caring for patients (secretly harvesting "cures" from clones she deliberately infected with many painful diseases).

To keep social order even at the cost of clone freedom.

Well-Intentioned Extremist
Matron Casp was the leader of the Sisters of Plenitude, the main antagonists of the Doctor Who episode "New Earth" - like all members of the order she belonged to the Catkind race and was (simply put) an anthropomorphic cat : at first she seemed a kind and charitable leader who cared deeply for her patients but was revealed to be a ruthless extremist who was willing to keep many clones in perpetual suffering to achieve her goals, seeing the clones as inferior life-forms she could treat as she saw fit.

Casp was the Leader of the Sisters of Plenitude, she controlled the experiments on the humans in the secret Intensive Care Unit beneath the Hospital on New Earth during the 500,000,001st century. Casp was using the experiments to cure other patients in the New New York hospital which Casp was Matron of. The hospital gained much success from the apparent curing of patients, but the secret of the Intensive Care unit was still kept. Sister Casp tried to divert the Doctor from the unit, but Cassandra, inhabiting the body of Rose Tyler, discovered the unit and led the Doctor to it. Cassandra then accidentally let free the Intensive care patients, and resulted in the quick death of Casp's colleague Sister Jatt.

Casp put the hospital under quarantine, and then disappeared. She attempted to flee from the infectious patients, by climbing up a lift shaft ladder in pursuit of the Doctor and Cassandra/Rose. However a patient grabbed Casp's ankle, spreading its numerous viruses to her immunity-free body and Casp fell from the ladder and plummeted to the bottom of the shaft, killing her.

Casp is a well-intentioned extremist who believed she was doing good for the world (perhaps even the universe) but was willing to engage in methods that were cruel at best and downright despotic at worst.

To Casp clones were simply creations and thus had no right as sapient beings, she justified the practice of infecting clones with painful diseases as a necessary evil to ensure that other species could live in a pain-free utopia.

This stance was seen as abominable by the Doctor, who has long valued all life (whether it be human, alien or artificial) - which put her in conflict with the Time Lord.

Matron Casp had numerous abilities but was not a true fighter at heart, she prefered to manipulate and thus was not seen in combat often - as a feline she would have sharp claws and fangs which she could presumably use to defend herself if needed.

By far her deadliest ability was her knowledge on advanced genetics and medicine, which allowed her to create clones infected with multiple painful diseases, these clones were kept in perpetual pain underground so the Sisters could harvest "cures" from their bodies and via this barbaric torture they had eliminated many diseases in the upper world.

Casp was not immune to the diseases she inflicted on the clones, as was shown when one touched her, thus she would of died of the shock even if the fall from the shaft had not killed her first. 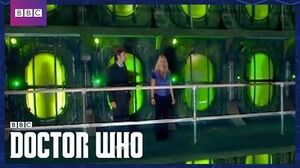 A Human Farm - New Earth - Doctor Who - BBC
the Doctor finds Matron Casp's dark secret and confronts her for the first time.