Have Yuzu all to herself (formerly; failed).

Support Yuzu and Mei's relationship and help it grow.

Matsuri Mizusawa is a character from the 2012 yuri (girl-on-girl genre) manga series Citrus. Originally an antagonist, Matsuri slowly becomes more supportive of the relationship between stepsisters Yuzu and Mei Aihara.

She was voiced by Shiori Izawa in the Japanese dubbed version of the anime, and by Kristi Rothrock in the English dubbed version.

On the surface, Matsuri appears to be a cute and innocent girl, but on the inside, she is a deeply cynical and contemptuous person who views the world as being filled with idiots. As such, Matsuri had become manipulative over the years, her manipulative tendencies matching those of Mei's. Matsuri takes delight out of teasing others, namely Yuzu and Harumin, or orchestrating events that lead to the suffering of others. She is also shameless as beside her job as pretending to be a camgirl, she also has no issues with two boys looking up her skirt, because she saw them as tools to sabotage the relationship between Mei and Yuzu. Most of her behavior can be stemmed from her parents being absent from her life because of their jobs. Because of this, Matsuri had developed clingy mannerisms, fixating herself on Yuzu because she was the only one to really acknowledge her, which leads to her being in conflict with Mei. Due to her fears of being alone, Matsuri is able to strike up an understanding with Mei, realizing how they were both looking for love, but grew bitter towards others.

Despite her precociousness and conniving actions, Matsuri is capable of showing affection towards other. She deeply cares for Yuzu, and when she learns that Mei was set up for another arranged marriage, she becomes outraged because it seemed as though her vow of supporting the couple will lead to heartbreak.

Matsuri makes her first appearance in chapter 8 of the anime entitled "Out of love" consoling a heartbroken girl who had recently broken up with her boyfriend. However, it is heavily implied that Matsuri was the one responsible for breaking the two up as she insults both of them under her breath. Matsuri later enters into the conservative all girls school unannounced, and she meets Mei. Realizing that Mei was Yuzu's stepsister by law, Matsuri goes about trying to sabotage the relationship between the two girls. One instance of this is hiring two boys to take a picture of Mei hitting her, though the results don't end up in her favor.

To this end, Matsuri kisses Yuzu to exert her dominance over Yuzu, and she tried to blackmail Mei into going on a date with one of her "internet friends" fully hoping that Mei would get raped by the assailant. As part of the plan, Mei insists for Yuzu to take Matsuri out on a date. Yuzu obliges, and meets up with Matsuri. Things seemingly go according to plan at first, until Yuzu began mentioning Mei by name. Enraged, Matsuri goes on a heated rant about how Mei was actually a "whore" and only using Yuzu. Yuzu silences her by heating her forehead against her own and calls out Matsuri for using people as objects to be manipulated, and attempts to force Matsuri into apologizing. Later on, she admits to Mei that she had failed at getting Yuzu back, as well as realizing that she and Mei weren't as different as she thought they were. 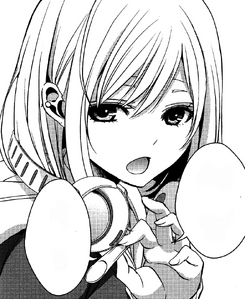 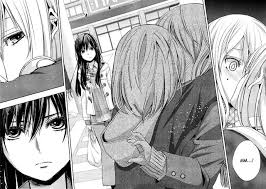 Why It Didn't Work - Citrus 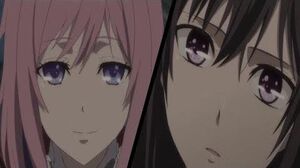 Matsuri kisses Yuzu - Citrus
Add a photo to this gallery

Retrieved from "https://villains.fandom.com/wiki/Matsuri_Mizusawa?oldid=3550407"
Community content is available under CC-BY-SA unless otherwise noted.