Caring for pet his cat Shoe.

Destroy Juan Corrida's chance of being with Celeste.

Get Shelly de Killer to kill Juan Corrida (both succeeded).
Keeping his "refreshing like a spring breeze" image.
Hide the truth about Celeste's suicide.
Get a not guilty verdict (all failed).
Escape Shelly De Killer's wrath (unknown).

Matt Engarde, also known as Shingo Otoro in the original Japanese localization, is the final antagonist of Phoenix Wright: Ace Attorney - Justice For All, specifically being the main antagonist of the case "Farewell, My Turnabout". He was a well-known actor in Los Angeles, known for being "refreshing like a spring breeze" and also playing the lead role in the popular "Nickel Samurai" TV show. He later became the defendant for Phoenix Wright's ninth trial, as well as the mastermind behind the murder of Juan Corrida.

In the anime adaptation, he was voiced by Yasuaki Takumi in Japanese and Dave Trosko in English.

Two years prior to his trial, Engarde dated his manager Celeste Inpax. Adrian Andrews, who would later became Engarde's manager, described them as being happy, yet he later broke up with Inpax for an indiscernible reason. Later, he learned that his rival Juan Corrida was planning to marry her; knowing that it would hurt Corrida deeply, Engarde informed to his fierce rival that he had dated her first, causing Corrida to call off the marriage; heartbroken again, Celeste Inpax hung herself, allegedly leaving a suicide note that was hidden by the man who found her body, Juan Corrida.

For the remaining years, the two men continued their rivalry, with Engarde rising to the top of his acting career. Engarde gained a reputation for being "refreshing like a spring breeze", besting Corrida in popularity polls. This culminated in Engarde's starring role in The Nickel Samurai, which competed with Corrida's show, The Jammin' Ninja. Corrida, however, conspired with Andrews, who became Engarde's manager, to disclose the suicide note, which Corrida had actually forged, that would destroy Matt's image.

During the Hero of Heroes Grand Prix at the Gatewater Imperial Hotel, which the Nickel Samurai won, Corrida arranged a press conference, during which he would appear in the Nickel Samurai costume and reveal the false suicide note. Realizing that Corrida was a threat to his reputation, Engarde purchased spy cameras to keep close tabs on him and eventually hired a professional assassin named Shelly de Killer to kill him for the bear figurine that contained Inpax's suicide note. Not trusting anyone, however, Engarde secretly recorded the killing to use as a way to blackmail de Killer should he turn on him. De Killer posed as Engarde's butler and as a bellboy at the hotel where Corrida was murdered to ward off suspicion.

Despite Engarde's plan, Adrian Andrews unknowingly incriminated him as the murderer by taking de Killer's trademark calling card from the scene of the crime, which would have made it obvious that Corrida was assassinated. After being arrested, Engarde ensured that he got the great defense attorney Phoenix Wright defend him by ordering de Killer to kidnap his beloved assistant, Maya Fey, and remotely offer a deal for the lawyer: Engarde's innocence for Maya's life.

During the trial, Matt was rather uncooperative and unhelpful towards Phoenix, knowing that de Killer would make sure Phoenix won the trial. He acted like a soppy actor for the largest part of the case in order to make sure Phoenix would continue to defend him. When Phoenix eventually learned of the truth, however, Engarde revealed his truly sociopathic nature, and openly mocked Wright: Even though he now knew his client was guilty, he would have to get him declared innocent anyway, or else his best friend would be murdered.

Now knowing for certain that his client was actually guilty, Phoenix became very indecisive on whether to save Maya's life by defending Engarde, or prevent Adrian Andrews from being wrongly arrested by bringing Engarde to justice. Ultimately, Engarde's admission to his acts had caused him to be seen as so horrible, everyone in Phoenix's general orbit—Maya's cousin, Pearl Fey, his late mentor, Mia Fey (being channeled through Pearl), Detective Dick Gumshoe, and even Phoenix's two main rivals, Miles Edgeworth and Franziska Von Karma—was brought together to work with him to find a way to foil the sociopath and bring him down for good.

In the end, through the cooperation of every aforementioned party, Wright achieved a miracle: He got Matt Engarde declared innocent, but also managed to reveal to Shelly de Killer via radio that Engarde had planned to betray the trustworthy and honorable assassin all along, using footage of him killing Corrida to blackmail him. Enraged, de Killer informed the court that he valued trust in his line of work above all else, and that when any of his clients betrayed him, he hunted them down as his next target no matter how long it took. Terrified for his life, Engarde desperately begged the judge to overturn his verdict, feeling that prison was the only place he would be safe from de Killer's wrath.

Though they are reletively similar, Matt has two seperate breakdowns depending on whether Phoenix decides if he is guilty or not. If Matt is called not guilty, he panics as he realises that he is danger of being killed by de Killer the moment he leaves the courtroom, and scratches his own face violently several times while frantically screaming that he is "guilty". When he finally stops, his face is covered in wounds and his hands are dripping with his own blood.

In case Engarde is called guilty, he becomes shocked with the verdict of his lawyer ruining his image. As in the previous scenario, he violently scratches his own face, being desperate and mad about his verdict, even though he knows that it truly is the only way to keep himself safe and alive.

Matt Engarde appeared to be a rather weak-willed, eccentric, and flaky individual, being interested in only motorcycles, wine and women. He rarely took any action himself without consulting his manager, and seemed to be rather air-headed and unintelligent overall, phoning anyone for any situation. He usually had a kiddish, innocent, enthusiastic, and somewhat naive smile on his face.

However, this personality was only what he showed to the public in order to divert suspicion of any wrongdoing away from him; in reality, he was a cruel, cold, and utterly ruthless sociopath. He had no feelings of affection or loyalty to anyone, and viewed people only as tools to further his own ends. He trusted only himself, and was even willing to betray those who considered him a friend. Human life meant nothing to him, save his own, and he was willing to even order the murder of an innocent girl to keep his reputation clean.

Unusually, he addressed his true personality almost as if it was a different person, even reintroducing himself after revealing his true nature. Even his appearance changed with the reveal: Normally, his long bangs hung over his right eye, giving him a soft and harmless appearance; however, when revealing the "true" Matt Engarde, he slicked back these bangs, revealing four twisted scars over his right eye, and allowed his innocent and charming smile to be replaced by a cruel and evil grin.

Despite his appalling treatment of other people, he genuinely loved his pet cat Shoe, personally requesting that Phoenix Wright and Shelley De Killer look after him. Ironically, this single act of kindness was what set his downfall into motion, as Wright was able to deduce Maya's whereabouts from hearing to Shoe's meowing. It is unknown what happened to the feline after his owner was arrested. 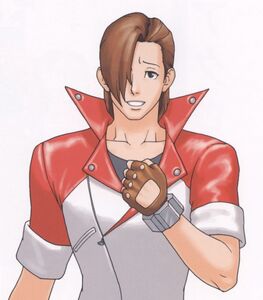 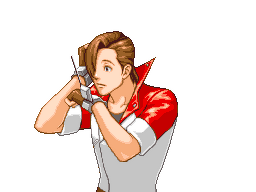 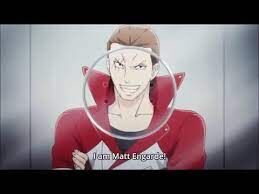 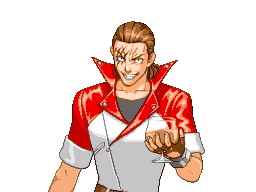 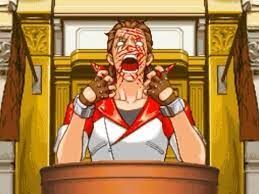 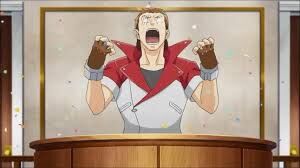 Matt's cameo in the end of Gyakuten Saiban