Mark Mandrill was a scientist turned alchemist when he spent his spare time attempting alchemy. Mandrill was trying to turn lead into gold until a vial of unknown chemicals spilled on the floor and exploded. Just as the hot metallic compound came towards Mandrill's direction, he put his hands up in a halting position and suddenly the metallic compound stops. Now able to telepathically control this material that he dubbed "Mentachem," Mandrill made a wand out of the material in order to control, reshape, transmute, or levitate any natural element or matter.

Mandrill began a life of crime and fought against Hawkman as well as the Justice League. He later becomes a member of the Secret Society of Super Villains and kidnaps some of the richest people in St. Roch, Louisiana in order to draw out Hawkman along with the rest of the Justice League into a confrontation. However, the battle between them lasts only a few seconds because Golden Eagle who was posing as Hawkman uses his axe to sever Matter Master's right arm. After his defeat, Golden Eagle kidnapped Mandrill and forced him to fashion a new battle armor. Golden Eagle turned Mandrill over to the Justice League so his memories can be erased along with many other villains.

Matter Master was one of the members of the Secret Society who discovered the identities of the JLA. Because of this fact, they had their minds wiped by Zatanna. He along with Wizard, Star Sapphire, Chronos, Floronic Man, and Felix Faust (other victims of the mind-wipe) later attacked the JLA and threatened to harm the people close to them, after their memories were restored by Despero.

Jatts heads to the Annex 3 which is the metahuman evidence confiscation facility in the Justice League Watchtower. Another fellow analyst named Herb interrupts Jatts during his attempt to break into the facility's vault. Jatts then uses his master key to access Mandrill's case locker. Jatts grabs the Mentachem wand and the properties of the wand react to Jatts' peculiar affliction. The wand begins to meld with Jatts' right arm and turns it neon green. Jatts staggers to his feet by grabbing a hold of Herb but to his surprise, Herb is immediately transformed into lead.

Jatts manages to escape the Justice League Watchtower but soon after, his getaway speeder is thrashed by Warhawk and Green Lantern. Jatts destroys one of Warhawk's wings and crash lands into a Gotham mall where Mary and Matt McGinnis were shopping. Jatts takes everyone in the plaza hostage and seals that section of the mall in polytritanium. Some of the hostages try to subdue Jatts while Mary McGinnis tried to reason with him but he transforms rebellious hostages into copper.

On the other side of town, Terry and Dana go to Goodwin's JR Speeders to buy a speeder for Terry's brother Matt because his graduation was coming up. Unfortunately, Terry gets a call from Bruce about a hostage situation at the Fields-Rich Mall. Terry tells Dana that he will be right back. After a while, Dana gets fed up with waiting and picks out a speeder for Matt. She drives the speeder home and when she arrives, she sees her mother waiting for her. Dana notices her mother's face is filled with shock. Dana asks what's wrong and her mother replies that Dana's brother Doug is being paroled.

Terry arrives on the scene but the Justice League halt his pursuit because they say its a League matter. Bruce convinces the Justice League that whoever has taken over the mall has fortified it except for one area. According to his thermal readouts, the hostages are clustered in the mall's central concourse. Bruce agrees to disclose the vital information that the League needs to get into the mall but only if Terry is put in charge of the mission.

The League agrees to work with Terry in freeing the hostages. Bruce suggests that they take an abandoned yet elevated trainway that goes right under that section of the mall. While the team makes their way through the underground passage, Jatts transforms the rest of the hostages into copper and Bruce digs up any files he had on Matter Master. Bruce concludes with Terry that there were a few guys that used the Mentachem wand but never realized its full potential which makes Jatts all the more dangerous since he has analyzed this wand for a short time.

In the end, Jatts battles the Justice League to the death. The usage of Jatts' newfound powers causes him to overload. Green Lantern contains the blast from Jatts' internal explosion with his ring. When the smoke clears, the League discover that Jatts has become a metal statue of himself. Perhaps this is end of the Matter Master's reign since the last of the Mentachem now resides in Jatts' frozen metallic body but then again it is Mentachem, mental being the key word and Jatts could just be hibernating as a statue til such time he can exact his revenge on the Justice League. 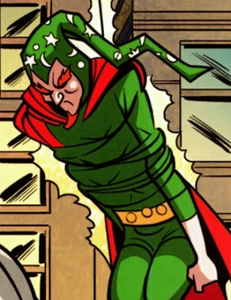