Adherent of the Roman Church

Spiritual leader of the Roman Church

Pope-Class Powers
Christian-based Magic
Ability to utilize the powers of both St. Peter's Basilica and the Vatican
Symbol of the Son of God and the Twelve Apostles

Obey the orders and wills of Fiamma of the Right (formerly).

Serve God.
Protect the Vatican and the church from Fiamma (somewhat succeeded).

Matthai Reese (in Japanese: マタイ＝リース, Matai Rīsu) is a character first introduced in the A Certain Magical Index series. He is the Pope of the Roman Orthodox Church and acted as the church's false leader as well as the most powerful man in the entrie Magic Side. He appeared in the God's Right Seat Arc, where he served as the false antagonist until the introduction of Fiamma of the Right which revealed Reese to be nothing more but a mere puppet. He served as the Pope for much of World War III until its conclusion where he resigned and gave the position over to Pietro Yogdis but still remains an adherent and member of the church.

He was voiced by Masafumi Kimura in the Japanese version of the anime, and by the late Bob Magruder in the English dubbed version.

The katana refered to his name is the same one the Japanese use to refer to St Matthew the Apostle, likely derived from his Hebrew name Mattay (מתי).

Matthai Reese is a stern looking old man with a long white beard that covers much of his face. He wears a Papal Regalia and is covered in white robes with a red and green cape with gold cloths covering his shoulders and a gold cross necklace as well. He carries around a staff with a crucified Christ on one side and the hanging body of Judas on the other.

Like all of the Popes, Matthai Reese is devout to the Roman Catholic faith and is deeply religious. He is devout to the Roman Orthodox Church and he strongly believes in the church and the Roman Church doctrines as well. He often has a hard time connecting with the masses and wonders how Laura Stuart of the Anglican Church could connect so easily. He is very protective of the Roman Orthodox Church and is willing to go far in order to protect it such as deploying the Queen of the Adriatic Sea and approaving of and launching the Invasion of Academt City. Due to his overprotective nature of the church, he was willing to have Touma Kaimjou be declared a blasphemous heretic and must be killed once the Magic Side knows of his existance and Imagine Breaker.

Despite this, however, he is still remorseful as he had a form of disdain when summoned to St Peter's Basilica late at night by Vento of the Front to have Touma be labeled a heretic and an enemy of God and was annoyed with being the servant of Fiamma of the Right and having to do his bidding. When Fiamma had betrayed Pope Reese during World War III, he was willing to sacrifice himself to protect the Vatican and while much of St Peter's Basilica was destroyed, he lived and was unwilling to allow the church to be betrayed in such a way. 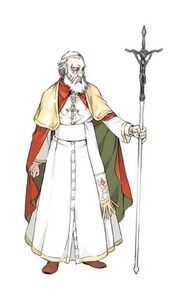 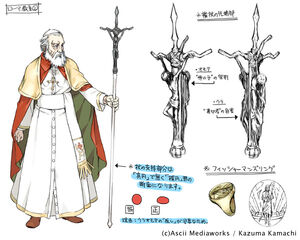 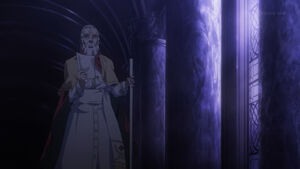