Kill Hannibal Lecter and "take his place" as the Chesapeake Ripper

Matthew Brown is a recurring villain in TV show Hannibal. He is a serial killer who admires Will Graham and emulates the murders he supposedly committed by killing a coworker. He is an orderly at the Baltimore State Hospital For The Criminally Insane, having been assigned to moving Will in and out of his cell to meet with visitors either in the "Private Room" or a boxed cage for a more public conversation.

It's unknown if Matthew had other victims prior to the bailiff or his attempted murder of Hannibal Lecter, but he became an orderly at the Baltimore State Hospital somewhere prior to Will Graham's incarceration. He was responsible for various patients but also handled the wires set by Frederick Chilton in order to "listen in" on conversations. He stated that he learned to imitate orderlies as the result of his time as an inmate in a mental institution.

Former FBI consultant Will Graham is placed in the Baltimore State Hospital For The Criminally Insane following his arrest by Jack Crawford and subsequent capture after his escape in order to figure out what happened to Abigail Hobbs. His files are handed over to the hospital, where they likely resided in Frederick Chilton's office and Matthew read over them many times. That, coupled with the news articles and other media involving Will's alleged crimes, caused Matthew to gain an extreme admiration for the patient...which appealed to his already deep-rooted psychologically disturbed nature.

With Will's court case in progress, he took it upon himself to meet with Andrew Sykes at his apartment (the two apparently knew one another and he had Sykes bring him Will's knife from evidence). When Andrew arrived, Matthew shot the bailiff in the chest once and proceeded to replicate Will's previous "murders". He threw the victim onto a mounted stag's head, proceeded to cut a Glasgow smile on the victim, removed an ear and finally rigged the place to go up in flames upon entry into the premises. He'd then mail the ear to the court, where it arrived during a recess in the case and eventually led to Andrew's apartment where it went up in flames as planned.

The purpose of the murder was to hopefully exonerate Will and allow him to go free, pretending to be the "Copycat Killer" that was popularized by Will (and later became his own title, due to evidence left by Hannibal). Will's lawyer Leonard Brauer insists on Will's supporters to use this murder as his new defense, which even Hannibal Lecter agrees on and proceeds to support it in court. Unfortunately, the prosecution asks questions that jeopardizes the situation and the judge rules that it be inadmissible in court with anything relating to it struck from the record.

Later that night, the judge is found supported by chains in the courtroom with his scalp removed. His heart and brain are placed on a set of scales held in his left hand, referencing the painting behind him. While initially this kill was believed by all to be the work of Matthew, it was actually done by Hannibal in response to the Judge's previous verdict (and used to force a mistrial, sparing Will for a little while longer).

Some time passes and Beverly Katz is found dead in the observatory where Miriam Lass's arm was found (as well as the location where Abel Gideon disemboweled Dr. Chilton). Will is allowed to visit the crime scene and goes through his psychological process to interpret the evidence...confirming the fact he already knew that Hannibal was responsible for this. Tired of being powerless to stop him, Will arranges a meeting with Freddie Lounds in order to relay a message to Will's "admirer". Little did he realize that the one responsible for that murder has been there all along, his accompanying orderly.

After reading the story, Matthew disconnects the wires so that he won't be recorded talking to Will. He approaches Will in his cage, where he confirms that he was the one responsible for the bailiff's murder. Matthew begins to talk about his appreciation for Will, while Will plays along to keep him talking. He admits he was responsible for Andrew's death but did not have a hand in the death of the judge, before he lets Will out and brings him to his cell. As they arrive, they have a quiet conversation on what Will wanted to talk to him about (via his message through Freddie Lounds) and he asks for a favor, which Matthew would oblige. Will asked him to kill Hannibal Lecter and without saying a word, Matthew gave a strong smirk before walking away...however, this conversation was overhead by Abel Gideon in the next cell and this news is later relayed to Dr. Alana Bloom who informs Jack Crawford.

In the meantime, Matthew tracks Hannibal to a swimming pool where he is doing various laps. He jumps in and proves to be a faster opponent than his adversary, beating him to one end and back long before Hannibal can catch up. After Hannibal reaches the end of the pool where Matthew got out, he's suddenly shot with a tranquilizer dart and rendered unconscious before being dragged out and brought to a secluded section of the facility. Matthew props Hannibal up ontop of a bucket, with a rope tied around his neck and a wooden rod strapped behind his back. He also slits both his wrists vertically, allowing blood to drain out constantly while he explains the mechanism of his plot. Either Hannibal can choose to kick out the bucket now and end it quickly or continue to allow his blood to drain out, thus weakening him enough to hang irregardless.

Matthew proceeds to talk with Lecter, first questioning him on whether or not he killed the judge...then asks him if he's the Chesapeake Ripper. He smirks and confirms this fact through the dilation of Hannibal's pupils to both questions, going on to state that he could become the new Ripper himself and claim Hannibal's murders as his own. He goes on to mention the Iroquois used to eat their enemies to gain strength, with Hannibal stating that Matthew will have to eat him and Matthew simply begins to laugh with a grin. Just then, Crawford approaches from behind aiming his gun at Matthew and Hannibal blurts out that he has a gun, which as soon as Matthew turns results in him being shot in the left side of his chest. Still alive, he kicks out the bucket from under Hannibal and this forces Jack to rush to save his life by using his strength to support Hannibal until help arrives.

Matthew is injured but alive, now in custody.

Matthew is a psychopath that became highly intrigued with Will Graham, following his incarceration into his mental facility. He can be described as an avid admirer for Will, impressed with the way he apparently killed his victims (completely unaware that these were actually the victims of Hannibal Lecter) and after studying Will's file thoroughly, he projected the methods of which the victims were killed onto a single individual as a homage to his appreciation. He also states that the two of them are like "Hawks", solitary creatures that can be scared away by the "smaller birds" (regular people) but if they worked together, the hawks could remain dominant.

He is very observant as those around him, knowing how to tell the answer to a "yes" and "no" question by the dilation of one's pupils. In his conversation with Hannibal, he expressed that he was willing to become the new Chesapeake Ripper, after learning the truth about his would-be victim's identity. He mused about Hannibal's murders becoming his own, as he remarked on how the Iroquois used to eat their enemies to gain strength. 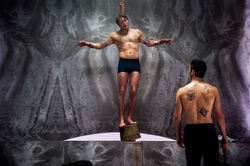 Retrieved from "https://villains.fandom.com/wiki/Matthew_Brown?oldid=3704287"
Community content is available under CC-BY-SA unless otherwise noted.