Member of the League of Evil Exes

Sending threatening e-mails to his foes.

Matthew Patel is a major antagonist in the book "Scott Pilgrim", it's movie adaptation "Scott Pilgrim vs. the World", and the video game based on it. He is Ramona Flowers' first ex-boyfriend and a member of the League of Evil Exes.

In the movie adaptation, he is portrayed by Satya Bhabha.

According to Ramona, she only dated him because not only she wanted to use his powers to wipe out the school's jocks, but because he was the only non-white, non-jock kid in her school at the time, and they only kissed once in their entire relationship. She then dumped him when he reached the typical teenage capriciousness and he turned evil during high school, moving far away from the USA by then.

In the comics, Matthew begins sending Scott threatening e-mails about The League of Evil Exes, but Scott ignores all of them. Patel then attacks Scott during one of Sex Bob-Omb's shows at a small club. After Patel explains the situation to Scott three times, a fight ensues between him, Scott and his friends from the band in a musical battle. Eventually, even with Patel summoning his demon hipster chicks, Scott throws a punch at Matthew's face which finally defeats him, as he disintegrates into $2.10.

In the movie, Patel appears during a show of Scott Pilgrim's band, the "Sex Bob-omb", crashing through the roof and challenging Scott to a fight. Patel attacks Pilgrim while singing a song called "Slick" in a fashion similar to Bollywood productions, as he throws fireballs and levitates around the area. He then summons his demon hipster chicks to fight Scott, but loses when Scott launches one of Kim's (one of Scott's ex-girlfriends, and his band's drummer) cymbals at him before hitting a final punch, causing Patel to dissolve in $2.40 in coins.

In all adaptions, Matthew respawns back at his home after being defeated, having learned his lesson.

Patel is the very first boss to be fought, found at the end of World 1. His jacket is now a black one instead of his usual tanned one. His attacks are limited to fireballs and melee. Once his health is critical, he will summon his demon hipster chicks to help him, forcing the player to defeat them in order to reach Patel. When he is defeated, he explodes in a flash of light, leaving behind $2.10.

Patel is over-the-top at best, constantly making movements with his head and hands when speaking. He can be very maniacal when he wants to, and his powers are all proof of that.

Matthew, along with levitation and pyrokinesis, is able to summon Demon Hipster Chicks which aid him in combat. He's a highly accomplished martial artist, capable of fighting on Scott's level and, along with Ramona, battling defeating several jocks. 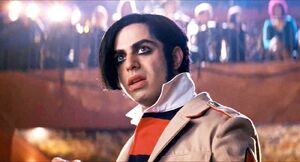 Matthew in the movie adaptation.

Matthew in the video game.