Make Joe Potter confess his crimes to the police (succeeded).

Remove all evidence for being partially responsible for Harry's murder (failed).

Matthew "Matt" Trent is the villain-protagonist of the Black Mirror episode "White Christmas".

He was portrayed by Jon Hamm, who also portrayed Buddy in Baby Driver and Herb Overkill in Minions.

One day, Matt meets Joe Potter who just woke up at a small remote outpost house in the middle of a snowy wilderness on Christmas day. Matt asks Joe why he accepted the job at the outpost. Joe doesn't remember and asks Matt the same.

Matt explains that he had an extra illegal job as a dating guide helping single men with pick-up lines, and once tried to help a young man named Harry to impress on a girl at a party. Via advanced visual technology called the "Z-Eye" that all the citizens have implanted in their heads, Matt could look through Harry's view while the two could communicate as well. Harry met a girl called Jennifer, who Matt taught Harry how to impress. Jennifer brought Harry home and took him to the bedroom and gave him a drink, which turned out to have poison in it. As it turned out that Jennifer was a schizophrenic who thought Harry was the same and committed murder-suicide with Harry against his will, while Matt tried to tell him to walk away. When it was too late, Matt tried to remove any evidence of him being related to the murder. That is until his wife saw what he was doing and took his daughter and left him. He was then charged for indirect murder.

Matt Trent's primary job before used to be at a company called Smartelligence, which consists of him informing the "cookie-clones" (small devices that contains an exact digital clone of one person's mind) what their purpose is - that is, to control the home and electronics of their real selves (such as baking breakfast, turn on music, etc) through remote control and do what they tell them to, since they know exactly how they would want it. On the cookies, there is the option to change the time-relativity for the cookie-clone, making the time for them go slower or faster, depending on what the controlant of the cookie chooses. However, they can't sleep unlike real humans.

He enslaves a clone of a woman called Greta in a cookie. Appearing in an isolated room with nothing but a control panel, the clone gets angry because what she paid for was to HAVE a cookie and not become one. Matt explains to her that she is not actually the real Greta, just an AI-clone of her real self.

Traumatized and mentally tortured, she begs him to give her something to do. Happy to inform her, he gives her the said purpose of cookies: to control the rooms of the house (kitchen, bathroom, living room, etc) through the control panel and do whatever the real Greta asks her to.

Back at the present time at the outpost, Matt wonders what Joe did. Joe explains a long story starting with him having a fight with his girlfriend Beth when they found out she was pregnant. She then refused to talk to him and visually blocked him through the Z-Eye, and got the police on her side to make him stop following her. After several years, Beth died in a a train accident and Joe could see that she kept the baby, a daughter. When Joe finally tried to talk to his seeming daughter, it turns out that she was actually the child of Beth's colleague, as she had his features instead of Joe's. When a sad Joe went into the house where Beth's father Gordon was, Joe lost control and accidentally killed Gordon, leading to the little girl to eventually get lost and died.

When Matt got Joe to tearfully admit that he killed Gordon, he jumped up and cheered, not caring at all about the tragic story Joe just told him. Matt then turns to Joe and sarcastically apologizes. As it turns out that they had both been inside a cookie all the time and also that the entire scene with the outpost house was just a set-up so Matt could help the police by manipulating Joe into confess to murder. Matt appears back at the police's office as they cheer that they finally got Joe's confession so that he could be imprisoned. The police thank Matt, but tells him that his punishment for indirect murder is only downplayed. They tell him that he now can avoid prison, but that his new punishment is instead to be blocked by everyone's Z-Eye. Matt leaves the police station where all the people through his view are blurred out and everyone else sees him in complete red. 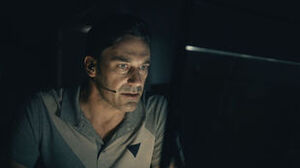 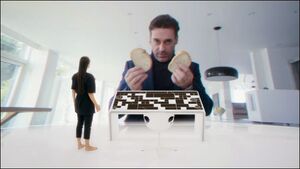 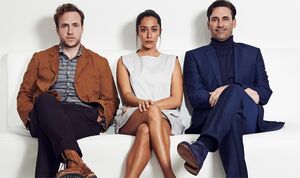 Joe, Greta and Matt.
Add a photo to this gallery
Retrieved from "https://villains.fandom.com/wiki/Matthew_Trent?oldid=3434974"
Community content is available under CC-BY-SA unless otherwise noted.