Maudeline Everglot is the secondary antagonist of Tim Burton's Corpse Bride. She is the mother of Victoria Everglot.

She was voiced by Joanna Lumley.

Maudeline Everglot is married to Finis Everglot, a lord who served as a secondary bad guy along. She is a stern, cold woman who tolerates her husband and almost never smiles. She is quite concerned with propriety and proper appearances.

At the Rehearsal of Victor and Victoria, When Victor dropped the candle by mistake, her dress was nearly on fire and Barkis puts out the fire with his wine, her and the whole family were very disappointed in Victor.

After the Corpse Bride took Victor away, Victoria warns her Mother and Father that Victor had been took away by a Corpse Bride, but She and her husband Finis Doesn't believe her, so Maudeline and Finis send her to her room, after Victoria's escape to warn the priest, Pastor Galswells, he brings Victoria back to The Everglot's Mansion and tells Maudeline that she's insane, and then Maudeline forces her maid and butler to lock Victoria's window to make sure she doesn't escape again. When Lord Barkis comes up to The Everglot family, he persuades to marry Victoria and agrees with him, Maudeline and her husband forces their daughter to marry Lord Barkis according to plan.

After Barkis and Victoria's Wedding, The People of Underworld seize to haunt all the people, even The Everglots run straight to their room with fear and never seen again in the final film. 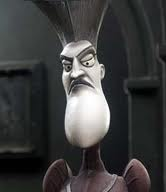 Retrieved from "https://villains.fandom.com/wiki/Maudeline_Everglot?oldid=3775566"
Community content is available under CC-BY-SA unless otherwise noted.