Hunting down the Black Dragon clan.

Mavado is a high-ranking and commanding member of the criminal organization known as the Red Dragon Clan and an antagonist in the Mortal Kombat series of fighting games. He will stop at nothing until the band of deserters called the Black Dragon Clan is forever eradicated.

Mavado is a merciless and cruel crime lord. Unlike Kano who resorts to scare tactics and brute force, Mavado uses discipline and superior intelligence in combat. Like all members of Red Dragon Clan He too has an antagonistic rivalry with the Black Dragon Clan: namely members such as Kano and Kabal.

Mavado's role in the game's story began sometime before the events of Mortal Kombat 4. Since the Red Dragon's top priority (outside their later-revealed true main goal) is the extermination of the Black Dragon while still desiring to keep their existence secret, they decided to use the Special Forces to serve their own purposes. To that end, Mavado's instructed his subordinate, Hsu Hao, to infiltrate the Outer World Investigation Agency and help them in tracking down and killing the remnants of the Black Dragon, a task Hsu Hao was largely successful.

After the events of Mortal Kombat 4, with Jarek seemingly killed by Jax, and Kabal presumably killed by Mavado himself (the latter's trademark hook-swords being taken as trophies in the process), Hsu Hao's task was deemed successfully over. However, Mavado was then contacted by the Deadly Alliance. Both sorcerers saw the Red Dragon as a great potential ally for their eventual domination of Earth Realm. Mavado was hired to fend off Kenshi, in return acquiring the opportunity to be given the last Black Dragon member: Kano, at the time a general in the service of the Deadly Alliance. They also requested that the Red Dragon destroy the Outer World Investigation Agency's techno-portals to prevent the Special Forces from being able to travel to Outworld.

Mavado makes his debut during the events of Mortal Kombat: Deadly Alliance: he agreed to perform given tasks by the Deadly Alliance and instructed Hsu Hao to destroy the Outer World Investigation Agency's underground portal facility, shortly before traveling to Outworld himself through a secret inter-realm portal located in the Lost Sea. Mavado tracked down and defeated Kenshi, allowing him to have his fight with Kano, with the former emerging as the victor. However, rather than killing his foe Mavado captured Kano and had his Red Dragon minions bring him to their headquarters. Mavado then ordered Hsu Hao to murder Shang Tsung before the Oni demons got to Quan Chi, but Hsu Hao never reported back (Hsu Hao was exposed of his treachery and lost to Jax in a combat). Like his overlords Quan Chi and Shang Tsung, though, he had little time to revel in his victory. Shortly before Mortal Kombat: Deception, Kabal returned fully recuperated from his stay in Chaos Realm and seemingly killed Mavado in a fight, retrieving his hook-swords.

In Mortal Kombat: Armageddon, Mavado returns, apparently having survived. He is still seen wielding hook-swords as a weapon, but these are presumably no longer Kabal's. In the game's Konquest mode, Mavado is seen in the Red Dragon's lair reporting to Daegon that the clan has located Blaze. Daegon then orders him to kill his brother Taven while he prepares to leave. Taven defeats Mavado, but Mavado is able to escape using a hidden grappling hook (or elastic ropes) to propel himself into a secret compartment.

Later, he would join the Forces of Darkness in the final battle, and died alongside the rest of the Kombatants.

Though unseen, Mavado is mentioned with a Red Dragon member commenting during Sub-Zero's siege that Mavado had been against holding onto one of the Kamidogu daggers they stored in their temple.

After the Red Dragons allied with Mileena and Reiko, Mavado is seen waiting to spring an ambush on Kotal K'etz forces using Lin Kuei cloaking technology, killing one of K'etz soldiers by impaling them with his spear before revealing himself and his Red Dragon soldiers.

Mavado is mentioned by Goro when he informs the Red Dragons of Kotal Kahn's approach, the Red Dragon commander having infiltrated the capital city at some point prior.

Mavado is revealed to be listening in on Sonya Blade and Kotal Kahn's conversation. Learning that the Black Dragon have kidnapped Sonya's daughter, Cassie, and her friend Jacqui and brought both to Outworld, Mavado is amused by the opportunity presented to him and orders his men to stand down, telling them they have a new objective.

Later, Mavado's group ambushes Kano, Erron Black, and Black Dragon minions and killing the two Black Dragon lackeys who were holding Cassie and Jacqui. Mavado demands the hostages before proclaiming he will send Kotal Kahn a message with Kano's blood. Mavado informs Erron Black that the girls are to go to Reiko, as well as arrogantly telling Kano that his forces outnumber theirs, only for Kano to kill one of the Red Dragon soldiers, prompting an all out brawl between the Black and Red Dragons. Mavado draws his hook sword and duels with Kano, ending up stabbed in the shoulder as Kano mocks Mavado's fallen comrade Hsu Hao. Before Kano can kill Mavado, one of the Red Dragon soldiers saves his commander.

When Kano betrays Erron Black and absconds with Kotal Kahn's Portal Stone, Mavado mocks him for trusting Kano before cutting Erron Black's chest with both of his hook swords, wounding the outlaw. Turning his attention to the girls, Mavado dodges as Cassie and Jacqui open fire with firearms taken from the killed Black Dragon soldiers, and the girls use up all their ammunition killing Mavado's forces. Mavado tells the girls while Reiko wants them alive, he makes it clear he doesn't have to bring them intact and leaps at them.

While managing to wound Cassie on the arm with his hookswords, Jacqui gets Mavado in a lock, allowing Cassie to shatter one of his knees with a kick. Cassie then finishes off Mavado, eviscerating him with his own hook sword. His disemboweled body is later found by Cassie's parents Johnny and Sonya (much to Johnny's shock and Sonya's approval), as they investigate the whereabouts of their daughter.

Mavado was a skilled martial artist and wields a pair of hookswords as his weapons. Although lethally proficient with various melee weapons, his signature weapons comes in thr form of elastic whips with steel hooks attached to them. These whips seem to be especially sturdy, as they are able to support the body weight of an average adult male. He also uses a set of elastic ropes with prongs on the end to he uses in a slingshot like manner to deliver strong attacks or evade attacks. The soles of his shoes are equipped with retractable razor-sharp spikes, which can give him better traction, or give him the fatal edge with his attacks.

In addition to his expertise in weapons, he is also very mobile, notably when it comes to jumping. For example, he is able to jump at a very high height in different situations such as in the Mortal Kombat X Comic series. He is also able to add up his strength in his physical attacks.

Unlike the other characters, he doesn't have any supernatural abilities. Nevertheless he is a formidable fighter. 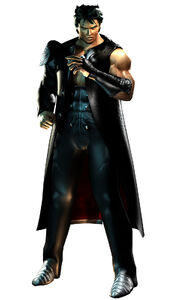 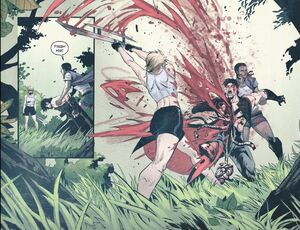