Annoying or making life miserable to others.

Bullying the rest of campers.

Max is the main protagonist of the Rooster Teeth internet series Camp Camp. He is a rude, profane, grumpy little boy with no respect for authority, who is forced to spend his summer at Camp Campbell, against his wishes. Along with his friends, Nikki and Neil, Max is always causing chaos, rebelling against the councilors, and most of all, trying to escape.

He is voiced by Michael Jones.

Little to nothing is known about Max's family back at home aside from his parents bring Indian immigrants who came to America to escape their home country, wanting to avoid the hard labor enforced by India's government, as mentioned by Max in "Kamp Kool Kidz".

Its been made more than clear that Max's parents are very neglectful and don't seem to care about him as a person. The sole reason they sent him to Camp Campbell was to get rid of him for the whole summer, evidenced they didn't even sign him up for a specific activity and were the only parents not to show up on Parent's Day. This makes it very clear that Max's parents mistreat him and would much rather be disassociated with him.

At Camp Campbell, Max is a chaotic, trouble-making, kid who is completely disrespectful to his camp councilors, David and Gwen. He absolutely despises every second of being at summer camp and seizes every opportunity to escape. What he plans to do after he escapes is unclear.

In series premiere, "Escape From Camp Campbell", Max is waiting at the camp entrance with David, awaiting the arrival of two new late-entry campers (Nikki and Neil). When the campers get there, Max is quick to try and hop the bus and drive off to escape but being too short to reach the gas, is quickly thwarted by Quartermaster coming up and carrying him back to the ground.

Later in the episode, Nikki and Neil get quickly fed up with the camp and want to join Max in escaping. While David sings a dumb song about how great the camp is, Max switches himself out with a decoy and runs off with Nikki and Neil. This time, he succeeds in boarding the bus and with the help of his new friends, is able to drive off and leave the camp. However, it doesn't take long for him to crash the bus and get tracked down by Officer Sal. Being a minor, Max doesn't get in any trouble himself, so Officer Sal gives a ticket to David and tells him that he's getting really sick of having to come up there. Max lets David know that thanks to the addition of Nikki and Neil, he now has three "little bastards" to deal with and suggests he prepare for one hell of a ride for the remainder of the summer.

In "Mascot", Max sets off a Rube Goldberg trap that catapults a boulder reading "Fuck the Police" into a hamster, which knocks it into the lake, where it eventually ends up getting eaten by a platypus. Max claims that he meant to strike David down and kill him.

In "Scout's Dishonor", Max, Neil, and Nikki try to escape Camp Campbell at night with a canoe, piloted by former rival camper, Billy Nikssilp. However, Billy reveals to the trio that he never left the rival camp and attacks them in the middle of the lake. Nikki and Neil are able to escape but Max is taken to the Forest Scout headquarters, where he is tortured by the other forest scouts. While he's there, he insults their leader, Edward Pikeman, on his gross pimply face, which deeply hurts his feelings.

In "Kamp Kool Kidz", Max was sick of cleaning the floors of the mess hall and led the kids of Camp Campbell in a rebellion against Camp Campbell. He and the other kids all teamed up to duct tape Quartermaster to the wall and later tie David and Gwen to a flagpole. However, shortly after taking over, Max is overruled as leader by other rebellious teen, Ered Miller, who every other camper (except Neil and Space Kid) nominate as their new leader. Max, Neil, and Space Kid leave Camp Campbell and start their own smaller team, which they use to rebel against Ered's camp. A war breaks out between the two teams, which is eventually broken up by Cameron Campbell returning from his long time in hiding from the FBI. However, he only returns to take some money and then immediately leave again. Nonetheless, he frees David and Gwen, causing Max and the other kids to get in trouble and clean the mess hall again.

Max has dark brown curly hair, neon bluish-green eyes, taupe skin, and a dark taupe upturned nose. He seems to be very short for his age, nearly knee height of David, so this causes his height to be at least 1/3 of David's height. David seems to be around 6'0, so, Max maybe around the height of 4-5'6. He is mostly seen scowling or smirking and rarely sporting a genuinely happy smile.

Max is known for being a very obnoxious and unpleasant child. He usually has an extremely argumentative and abusive attitude, having a certain interest in causing chaos and disaster within Camp Campbell since his arrival. He is shown to be exceedingly aggressive and resentful towards David, because he detests his attitude and the way he runs the whole camp, seeing him as mediocre and useless, without doubting revenge on him for which he is forced to participate in all of his activities. His vandalism causes him to commit unrest and acts that have consequences for his fellow campers. Even though he may be rude and all, he has shown a soft side when he feels sad, mostly from his parents not showing up to parent's day.

Max is proven to be really intelligent and smart, though sometimes he can forget the most obvious of stuff as shown in "Escape from Camp Campbell" when he hijacked the bus and forgot that he didn't actually know how to drive a bus. This is shown again at the end of "The Order of the Sparrow" where, when starting the bonfire with wet logs, he poured gasoline on them, unaware that it is highly volatile and caused a large explosion, showing that despite being clever, he is just a kid.

He also seems to be atheistic and seems to have absolutely no belief in any afterlife whatsoever, cheerfully stating "When you die, you're faced with eternal nothingness. It's gonna be great." In "Journey to Spooky Island", he also seems to scold science as he believes that the horrific experiments in Cameron Campbell's abandoned summer home were "mild experimentation at best". In the episode "Into Town", he considers the moon landings as a hoax conducted by the government to humiliate the Soviet Union during the Cold War. Considering the situation, this could have been to simply get rid of Space Kid. His intentions with David range from murder to make him question his flawed ideology and make him cry at night. In his words, he is not a monster.

In "Anti-Social Network" and "Romeo & Juliet II: Love Resurrected", it is revealed that he wants to look at boobs, revealing a lustful nature.

Despite all of this, Max is not truly an evil person. In "David Gets Hard" when Nurf revealed much of his background Max was visibly uneasy and sympathetic to an extent. Also, at the end of "The Order of the Sparrow", he manages to convince the entire camp to help him create David's image of a perfect summer camp after hearing him explain why he tries so hard for the campers. He repairs the ancient staff but tells David not to look too deep into it, showing that Max does have a kinder side to his personality. Also, the Season 2 episode "Gwen Gets A Job" reveals Max had a teddy bear named Mr. Honeynuts, one of the few (if not only) things of sentimental value to Max. Max also has a good reason for being so villainous in the first place, being that his parents never cared enough for him to even go to the camp and left him there to never deal with Max. Even not putting in his last name or contact information for his parents to actually find or take Max out of the summer camp if something happened to him. 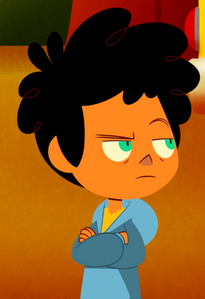 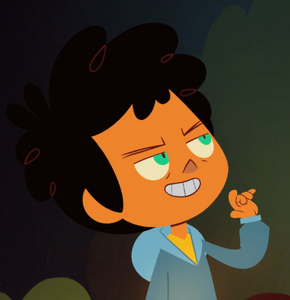 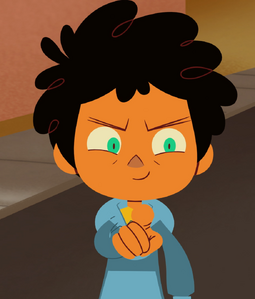 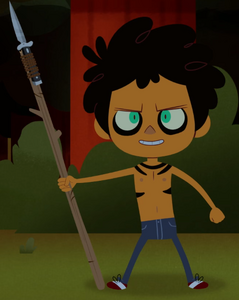 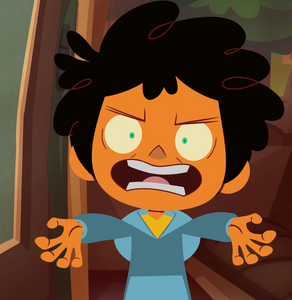 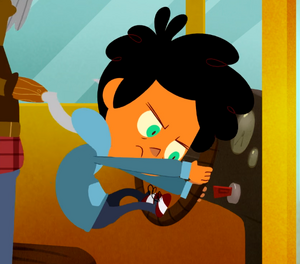 Max trying to escape with the school bus