Capture and execute every dog in New York City (failed).

Animal Control Officer Maxwell (or ACO Max for short) is the secondary antagonist of the 2009 Nickelodeon movie Hotel for Dogs.

He was portrayed by Eric Edelstein.

Max works at the New York City's animal pound, but as some times went by, he and his partner, Jake hates dogs and everyone that owns them as well. Max and Jake does everything in their to capture and lock up every single dogs in the New York City.

Upon learning that the Dogs are in the abandon hotel, He and Jake uses the opportunity to take full control of the capture with the other animal control officers and their boss, Herb Dooley; even when Bruce and his sister Andi tries to hide it.

After all the dogs has been captured, Max and Jake threaten to kill them all with the animal euthanasia. However Bruce and Andi's dog, Friday, escapes and return to Mark, Heather and Dave heads over to Bruce and Andi who formulates a plan to free all the dogs from the pound.

While Heather distracts Jake, Bruce and Andi manages to break into the pound and releases the dogs and Mark tackles and pins Max to the ground, allowing Dave,Andi, Bruce, Heather, Friday and the others dogs to escape.

When Max, Jake and all other pound workers reach the hotel, Max orders Officer Mike and the other police officers to arrest the kids until Max sees Friday and captures him. Bruce and Andi tries to stop Max only for the police officers to interfere and Max mocks them about Friday. Just as Max, Jake and all other pound workers attempts to capture the dogs once again, Bernie Wilkins, the kid's social worker, appears and tells everyone about how Bruce and Andi manages to create a family of dogs at this abandoned hotel. After Wilkins introduces the dogs in this hotel and delivers a heartfelt speech to the crowds about their past owners story, the police, reporters & the citizens are moved at this and they starts to explore the hotel. Exasperated, Max and Jake leaves the hotel along the other pound workers. Mark scares off Max in the process.

It is unknown what happens to him and Jake afterwards, although it can be implied that they're both arrested for their crimes and charged with animal cruelty and murder, and the animal pound gets shut down for good.

Max is a cruel, obese and heartless animal pound worker, who shares similarities with Jake. 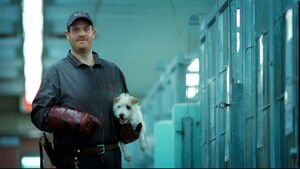 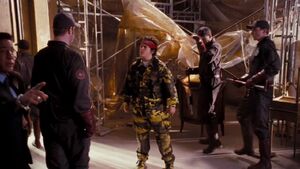