Torment and kill Sam Bowden and his family for getting him sent to prison for a rape that he committed (failed).

Maximilian Cady, often shortened to Max Cady, is the main antagonist in John D. Macdonald's 1957 psychological thriller novel The Executioners, which has been adapted into a film named Cape Fear.

In the 1962 film, he was portrayed by the late Robert Mitchum, who also portrayed Reverend Harry Powell in The Night of the Hunter. In the 1991 film, he was portrayed by Robert De Niro, who also portrayed Vito Corleone in The Godfather Part II, Travis Bickle in Taxi Driver, Jake LaMotta in Raging Bull, David "Noodles" Aaronson in Once Upon a Time in America, Louis Cyphre in Angel Heart, Al Capone in The Untouchables, Jimmy Conway in Goodfellas, Dwight Hansen in This Boy's Life, Neil McCauley in Heat, Gil Renard in The Fan, Ace Rothstein in Casino, Louis Gara in Jackie Brown, Fearless Leader in The Adventures of Rocky and Bullwinkle, David Callaway in Hide and Seek, Senator John McLaughlin in Machete and Don Lino in Shark Tale.

Max Cady lived in West Virginia and had three brothers who were criminals (one of which was killed during a prison riot). During World War II, Sam testified against Max after witnessing him rape a fourteen-year-old girl when he was stationed in Australia. Max was sentenced to 14 years of life at a hard labor prison camp. When Max gets out, he wants revenge on Sam due to not only his wife leaving him, but also for his son dying in an accident while he was in prison. He'd rape his ex-wife on occasion and threatened to murder her children if she ever tried report his raping of her.

He takes his revenge on Sam by poisoning their dog and trying to kill two of Sam's young boys, and actually shooting one of them with a rifle, almost killing him. By the end of the novel, Max attacks Sam's wife at his home and Sam shoots him as he is trying to escape-he later succumbs to his wounds and dies.

Cady is an ex-convict who comes back after several years (eight years in the original film and fourteen years in the remake) in prison to take revenge on Sam Bowden, the lawyer who helped put him in jail, and his family. Unlike in the novel, where he refers to Sam as "Lieutenant", he refers to him as "Counselor" in both films.

It must be noted that in the original film, Bowden testified against Cady in court, while in the remake he was in charge of his defense, but buried a report that could have kept him from serving time — because of being horrified by Cady’s act, as well as the fact that Cady bragged to him about having beaten two previous rape cases. The charges were of sexual abuse and battery (in both films). Also, during his confinement, Cady dedicated himself mostly to studying law, so he won't be caught off guard next time. In the 1991 film, he also comes from a religious background and therefore takes a keen interest in the Bible, using it to justify his actions as that of a man of God.

Cady’s wife and daughter left him while he was convicted, and since he blames Bowden for the loss of his family, he wants him to know what it’s like to experience such a loss — which is why he targets Sam’s teenage daughter, presumably with both sexual and criminal intentions. In the original film, he beat and raped his ex-wife after he got out, while in the 1991 film, it’s implied that he killed her.

Upon leaving jail, he meets Sam Bowden outside the court and has a little chat with him so Bowden can remember who he is and become aware of the fact that it won't be the last time they see each other. Shortly after he starts stalking the lawyer's family, he kills their dog by poisoning it. A few days later, he rapes and beats a young woman, but she refuses to go to court and press charges against him out of fear and shame. (In the 1991 remake, the promiscuous pick-up named Diane Taylor was changed to a clerk named Lori Davis, who works at the courthouse and with whom Bowden plays racketball.)

In the 1962 film, he stalks Sam’s daughter (named Nancy) at school in order to give her a scare. In the 1991 film, he calls the daughter Danielle (Danny) on the phone, pretending to be her drama teacher and invites her to the school auditorium. She figures out that he is Max Cady once they meet; however, he manages to convince her he didn’t kill her dog and that he doesn’t mean her any harm — as well as that her parents are holding her back. The two then kiss, and she runs out of the auditorium. Sam finds out about this, and his relationship with his daughter deters for a bit because of it. In both films, Sam becomes so desperate to be rid of Cady, he hires three men to beat him; however, Cady overpowers every one of them.

In both films, Sam and his family eventually travel to their houseboat on Cape Fear in order to escape from Cady. In the 1962 film, they have their private investigator come over; the PI is unfortunately killed by Cady once he and Sam get there and stay up all night to watch out for him, while in the 1991 film, they leave after Cady kills their maid and their PI at their home.

In both films, Cady secretly tracks them to the boat, climbs aboard and attacks them. In the 1962 film, Cady rapes Sam’s wife on the boat (so Sam will go to her) and leaves just in time to try to rape their daughter, Nancy. However, Sam is able to get to Cady before Cady can put his plan of raping Nancy into action, and they engage in a fight. Sam manages to grab his revolver and shoot Cady in the leg. Once he has the upper hand, he decides to have him arrested again instead of killing him, feeling killing him is what he wants and that prison is more painful.

In the 1991 film, Cady attacks all three of them on the boat at once. After Danielle sprays him with lighter fluid while he’s lighting a cigar and sets him on fire, Cady leaps off the boat into the water to extinguish the flames. However, he manages to pull himself back on board, and forces Sam to engage in a mock trial. A storm causes the boat to rock and catches Cady off guard, allowing Bowden to tackle him and handcuff him to the boat. Sam’s family escapes onto the riverbank and the boat is destroyed when it hits a group of rocks.

Bowden grabs a large rock and prepares to drop it on Cady’s head, but the current suddenly pulls Cady back out into river while he is talking rapidly in tongues. As Sam and Cady lock eyes, the piece of debris Cady is still handcuffed to sinks into the water, taking him with it and causing him to drown. 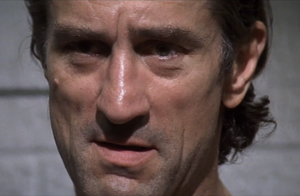 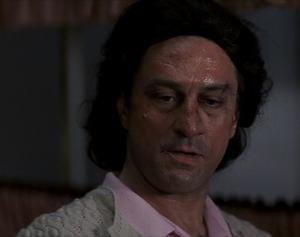 Cady disguised as the family's maid as he kills Bowden's PI.

Cady drowns in a river to his death. 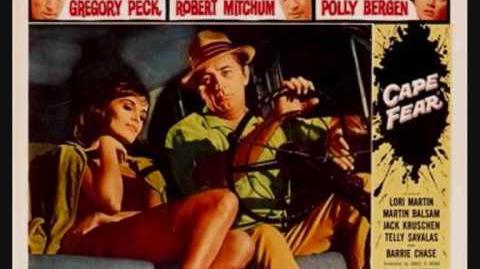