Creator of the Nine Eyes program
Agent of SPECTRE

Launch the Nine Eyes Program in order to give SPECTRE access to the entire surveillance systems in the world.

Shut down the '00' section of MI6.
Destroy the MI6 Agency and to kill M/Gareth Mallory.

Max Denbigh, also known by his nickname C, is the secondary antagonist of the 2015 James Bond film Spectre.

He is the head of the Joint Intelligence Services and a SPECTRE agent. Denbigh, or C, is the head of the Joint Intelligence Service (JIS), which consists of the recently merged MI5 and MI6. He is also a member of the British Government and secretly an agent of SPECTRE who wants to launch the "Nine Eyes" intelligence co-operation agreement between nine states, thereby taking control over the worldwide spying and surveillance systems.

He was portrayed by Andrew Scott, who also played James Moriarty in Sherlock and Obake in Big Hero 6: The Series.

Meeting 007 for the first time

On his return to London from Mexico City, Bond is indefinitely taken off field duty by the current M, who is in the midst of a power struggle with C, the head of the Joint Intelligence Service, which consists of the recently merged MI5 and MI6. C also wants to create the "Nine Eyes" intelligence co-operation agreement between nine countries, and close down the '00' section in the process.

While Bond is searching after information about SPECTRE, C brings the launch of Nine Eyes to the vote before the delegates of the participating countries. However, the vote does not reach the needed majority because South Africa votes against the program. After the meeting, M dutifully but sarcastically tells Denbigh that the world is better off without Nine Eyes, claiming that an agent in the field would be more efficient because a license to kill can also be a license not to kill. Denbigh opens his computer, playing a recorded message from Bond telling Eve Moneypenny to investigate Mr. White and Franz Oberhauser - the latter of whom is really Ernst Stavro Blofeld, the head of SPECTRE and Denbigh's boss. After playing the message, Denbigh states that M seems not to be able to control his own men. When M is shocked that Denbigh would monitor his own agents, Denbigh replies that they are monitoring everyone.

After SPECTRE blows up a target in Cape Town, South Africa is ready to join the Nine Eyes program. Denbigh withholds information about the next vote from M, leading M to arrive after everything is set. M meets Denbigh after the conference, where C tells him that the '00' section is now officially disbanded, prompting M to call Denbigh a "cocky, little bastard". Stating that things are not over yet, M and Moneypenny leave a gloating Denbigh behind.

While being Blofeld's prisoner at the latter's African base, Bond finds out that Denbigh is actually an agent of SPECTRE and is about to get SPECTRE access to the greatest surveillance system in the world. After escaping from the base and returning to London, Bond and Swann meet M, Bill Tanner, Q and Moneypenny and plan to arrest C and stop the launch of Nine Eyes. En route they are ambushed and Bond is kidnapped. M and the others escape and proceed to wait for C in his office.

When Denbigh arrives, he cannot access his computer. He then sees M, stating that he cannot believe that M is responsible for it. M replies that he isn't, but his quartermaster is. C tells M and Q that, given that they are out of job, they are technically trespassing, but M replies that C got it wrong and is the one to be arrested. When asked by what charges, M says: "poor taste in friends", causing Denbigh to realize that the Secret Service knows that he's with SPECTRE. While talking about that he only did what needed to be done, Denbigh draws a gun out of his desk and aims it at M, claiming that they now know that M stands for "moron"; however, when he pulls the trigger, the gun does not fire. M reveals that he had emptied the magazine prior to Denbigh's arrival by responding that they now know that C stands for "careless".

As Q successfully prevents Nine-Eyes from launching, M holds Denbigh at gunpoint and prepares to escort him out of the building to have him arrested. However, he is momentarily distracted by the arrival of Blofeld's helicopter and C uses M's moment of non-observance to attack the former. In the ensuing struggle, a shot is fired, causing a pane of glass to shatter and fall onto both Denbigh and M. This incident causes Denbigh to lose his balance and drop over the ledge of the platform, falling to his death several floors below.

Max Denbigh is a man who, depending on the situation, can be arrogant and who is always assertive. He initially appears to be polite when he presents himself to James but he soon reveals his colors as an unpleasant person, taunting M often, for example, when he tells that M isn't able to control his men. However, when his association with SPECTRE and his plan are exposed, he loses his temper, insulting M by calling him "moronic" and holding him at gunpoint. 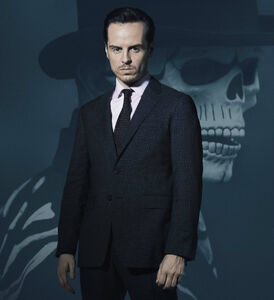 M is furious that Denbigh arranged for a Nine Eyes vote without his knowledge.

Denbigh and M fight for the gun.

Denbigh has fallen to his death. (M: And now we know what C stands for… careless.)