Lt. Max Eckhardt is a supporting antagonist of the 1989 film Batman.

He was portrayed by the late William Hootkins.

Max is a corrupt police officer paid by the crime lord Carl Grissom. Even though Batman and Eckhardt never met, he does work for the crime boss. He sometimes works for Grissom's right hand man Jack Napier — although reluctantly, as he considers Napier a “psycho” and an “A-1 nut boy” (in his words).

When Grissom finds out that Napier has been having an affair with his mistress, he orders Eckhardt to ambush and kill Napier during a set-up robbery at Axis Chemicals. A gunfight erupts in Axis Chemicals between the police and Napier’s men, during which Commissioner Gordon arrives and takes control, ordering the police to apprehend Napier alive. Eckhardt attempts to escape, but Napier shoots him in the chest and kills him. 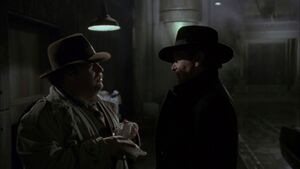 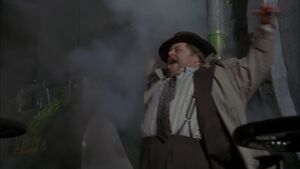 Eckhardt's death
Add a photo to this gallery

Retrieved from "https://villains.fandom.com/wiki/Max_Eckhardt?oldid=3487845"
Community content is available under CC-BY-SA unless otherwise noted.