Max Mordon
Boss (by one men of Odysseus Inc.)

Cultivating his image.
Betraying others, even his own allies.

Find the Idol of Paititi so he can be immortal (succeeded, but backfired).

Maximillian "Max" Mordon is the main antagonist of the 2012 computer-animated Spanish film Tad: The Lost Explorer.

He appears to be an archaeological explorer, but later turns out to actually be a mercenary from Odysseus Inc. who seeks to find the Idol of Paititi in order to gain immortality. He is secretly Kopponen's boss.

He was voiced by Pep Anton Muñoz in the Spanish version, and by Adam James in the English dubbed version.

Max Mordon is idolized by the hero, Tad Stones, a brickmason who dreams of being an adventurous explorer like him. Mordon is also dating Sara Lavrof, who joins Tad in his adventure to retrieve the lost idol of Paititi, which is being hunted by the evil Odysseus Inc. (led by the pursuing Kopponen). In the scientific community, however, Mordon is regarded a joke and a bad-taste one, with real archaeologists like Tad's friend Prof. Humbert and Sara's father Prof. Lavrof both showing little respect for Mordon's recklessness and the fact that he seems to be more concerned with cultivating his celebrity image than doing actual archaeology of any kind.

Later, Mordon is revealed as being much more than a narcissist: he is actually an evil man who is working alongside the Odysseus Corp. to get his hands on the idol, in hopes of achieving eternal life. To do that he kidnaps his bride's father (as Lavrof is the only one who can translate the ruins) and pretends to be kidnapped as well to conceal his real goals.

During the journey, Tad learns about Max's true nature and the latter secretly ordered his men to kill him and Freddy. Tad later exposes Max's true intentions to Sara. Max informs Sara to dismiss Tad. Max then exposes that Tad is not a professor as he claimed but a bricklayer. But Max also unintentionally reveals his own true nature to Sara, causing her to realize that Max is the mastermind behind the evil operation, kidnapped her father, and tried to kill Tad and Freddy. Sara slaps Max in the face, furiously calling off their engagement. Max nonetheless holds Sara and Tad at gunpoint as he orders his goons to move on.

As the group travels through the temple, several of the booby-traps were activated, causing Max to lose Kopponen and all of his remaining men. However, Max actually manages to get the idol and after stealing a giant golem that was owned by the Mummy, he fights against Tad, who manages to knock him off the golem and defeat him. However, Max takes over Paititi's idol and he is about to receive immortality. Though it would seem that Max has finally succeeded in his goal to become immortal, it turns out that the statue only grants immortality to those who hold it by turning them into mummies obligated to guard the idol as a price. As a result, Max is transformed into a living mummy, much to his horror.

Upset by this turn of events, Max demanded that there must be an antidote to revolve the curse, only to learn in horror that Professor Lavrof told him there is no antidote. Tad then glares at Max, then grabs him by the throat after being called Toad, bringing him to the mummy council. The other mummies of Paititi then arrive to take Mordon to a prison in their hidden city, dragging him to the darkest cell to eternal jail as punishment for his actions. As he is being dragged away, Max cries out in agony over his sealed fate while demanding that he be released, even asking to contact his agent as he appears on TV.

Max Mordon is currently imprisoned by the mummies, and it can be assumed that he serves a life sentence for all eternity in the mummies' prison.

Max Mordon is introduced as a famous archaeological explorer who is admired by Tad Stones, who calls himself his "number one fan" and dreams of being like him. However, Mordon is actually an evil and corrupt mercenary who works for the evil organization called Odysseus Inc. and has the goal to search the idol of Paititi in order to achieve eternal life. Mordon even pretends to be kidnapped to hide his true plans from Professor Lavrof's daughter, Sara, to whom Max was engaged. Additionally, he was more interested in preserving his celebrity image than doing real archaeology.

After being exposed by Sara and Tad for the true mercenary that he is (causing Sara to break up with him), Max has no problem taking Tad and Sara prisoner at gunpoint an he simply continues with his objective. Max didn't care losing Kopponen and his henchmens, as he just went on to get Paititi's idol on his own. While trying to get Paititi's idol, Max takes the opportunity to steal a giant golem from the Mummy with which he almost kills Tad; but Max is ultimately defeated by Tad. As Max touches the gold statue and is about to gain immortality, he insults Tad by calling him "loser"; however, as a consequence of being inmortal, Max is turned into a Mummy, with no antidote against the curse and being locked forever in the darkest cell of the mummy prison as punishment for his actions.

Unlike his successor, Jack Rackham, Max is less evil as he is unwilling to kill his own henchmens, as well he has comical traits.

Max Mordon is a tall man with dark brown hair, blue eyes, with green cargo pants and a white safari shirt with a red ascot. 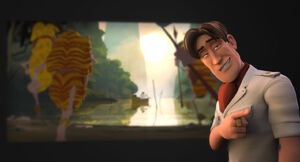 "Max Mordon on the case!" 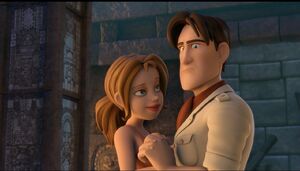 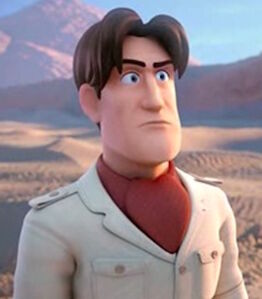 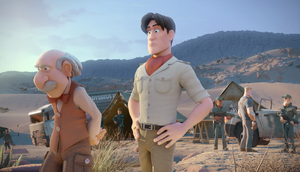 Mordon and Professor Lavrof supervising the digging in the desert 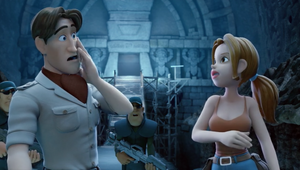 Sara slaps Max in the face for the true mercenary he is. 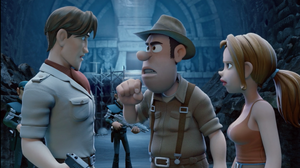 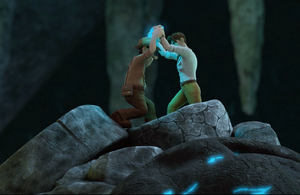 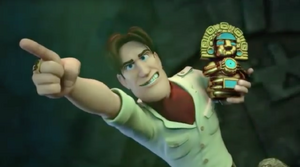 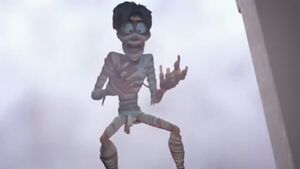 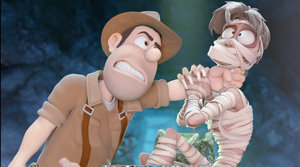 Tad snatches Max by the throat to bring him to the Mummy council. 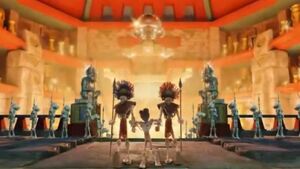 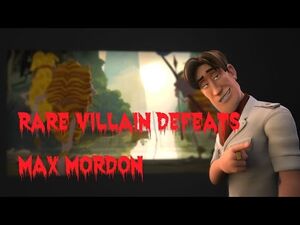