Minions
Max and Max are students at Zoo Phoenix Academy and Rusty's henchmen.

Max and Max first appears, when they try to bully the other students alongside Rusty for being a bunch of teachers pets.

Soon they are interrupted by Autumn who scolds rusty to protect his friends, but when Rusty starts to tease him Autumn he becomes furious and start screaming at Rusty causing the twins to run away scared, while Rusty is laughing at the misfortune he is suffering.

it's unknown what happened to them after that. 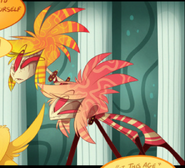 the max and max first appear alongside rusty where they try to harass the other students for being teacher's pet but they are soon interrupted by autumn when he scolds rusty.

it's not known what happened to the two after autumn started cursing the rusty like crazy,as they just disappear and never return.

they are likely to remain friends with rusty but continue in their parenting classes or continue to torture the other students just for fun.