Queen and heir to the throne of Almerac

Ruling over the planet Almerac and its citizens.

Getting what she wants.

Convince or coerce Superman into joining her as both her betrothed and new king of Almerac.

Maxima is a fictional supervillainess in DC Comics and an enemy of Superman.

Maxima is the descendant of a long line of alien despots whose empire is based on the planet Almerac. Thousands of years ago, Maxima’s ancestors decided to improve the strength of their own race through interbreeding with races from other worlds.

They embarked upon a series of interstellar wars, conquering worlds whose inhabitants they considered to be excellent genetic stock and capable of interbreeding with their own race. The strongest survivors were assimilated into Almerac’s empire.

Maxima’s ancestors wiped out any alien cultures they deemed genetically inferior. While preparing for a war with the interstellar tyrant Mongul, Maxima intercepted a hologram transmission of Mongul’s gladiatorial games. Maxima observed Superman participating in the games and decided that he would be the perfect mate.

However, Superman spurned Maxima’s advances and she has born a grudge against him ever since.

Maxima in Superman: The Animated Series. 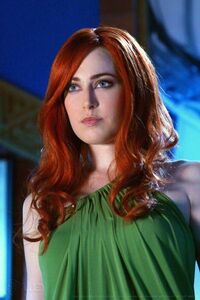 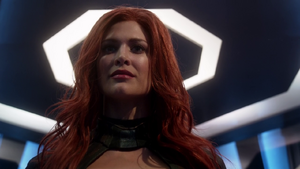 Maxima in CBS/The CW Supergirl.
Add a photo to this gallery

Retrieved from "https://villains.fandom.com/wiki/Maxima?oldid=3152054"
Community content is available under CC-BY-SA unless otherwise noted.