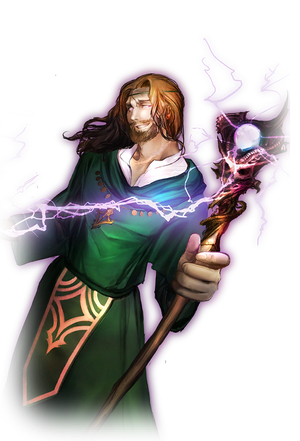 Maximus is a major antagonist from Romancing SaGa 3.

Maximus is the leader of the Divine Church branch in Pidona, having been collecting (in fact stealing) the relics of the Holy King for some reason.

He sent an impostor of Marquis Mikhail to steal the Masquerade, thus prompting Katharina's quest to retrieve it. He also killed the master blacksmith of the Pidona workshop to steal the Arakes spear and tricked Muse to drink a sleep-inducing poison to steal another relic.

If the player has the ex-pirate Herman in the group and take him to the church, he will immediately recognize Maximus as the pirate Jackal. Upon being unmasked, Maximus flees the place through a secret passage behind his desk.

The heroes follow him to the Divine Tower, where they tell the Divine Church leader Tiberius about Maximus true identity. Just then, Maximus storms the place with monsters, revealing his plans to collect all the Holy King's relics and use them to conquer the world. The heroes fend off the monsters and search for Maximus in the underground portions of the tower, being separated along the way. He is finally confronted by the party leader, who gets joined by the other members as the battle goes on. Maximus ends killed and the relics are retrieved.

Maximus, also known as Jackal
Add a photo to this gallery

Retrieved from "https://villains.fandom.com/wiki/Maximus_(Romancing_SaGa)?oldid=3270662"
Community content is available under CC-BY-SA unless otherwise noted.