Maxwell the Great
Maxy (by Charlie)

Demon pawn for 'Them' (formerly)
Survivalist

Sending people to his world and forcing them to survive.

Surviving in the world he created.

Return to the "real" world.

Be reunited with Charlie.

William "Maxwell" Carter was a powerful part-human part-demon, and the main antagonist in the survival video game Don't Starve.

Maxwell was originally William Carter, an English magician performing in California in the early 20th century. Later on he met Charlie , who he fell in love with and performed with him as a female assistant. It was slowly revealed by the game developers that Maxwell and Charlie were brought into the Don't Starve world after a tragic final act that ended with both of them being grabbed by shadow hands during performance.

In the secret video made by the game developers called Forbidden Knowledge, it is revealed that Maxwell began talking to Wilson, the game's hero, through his radio. Maxwell offered Wilson secret knowledge, which he gladly accepts, as Maxwell pours the information into Wilson's brain.

Wilson then began building a machine, with his new found knowledge. When he completed it, he was hesitant to pull the lever, until Maxwell shouted "DO IT" through his radio. Wilson pulled the lever and demonic hands then rose from the floor and pulled Wilson into the Don't Starve world.

The game begins with Wilson, or another one of the 9 unlockable characters, unconcious on the ground. Maxwell appears and says "Say pal, you don't look so good. You better find something to eat before night comes!"

If in total darkness the player will be attacked by Charlie, now a demonic, invisible being who can kill you in a maximum of 6 hits.

In Adventure Mode, Maxwell will come to greet you while you are knocked out, like in Survival, but now he is wearing a dapper cloak instead of a tuxedo. He will say different things in each World and will get angrier and angrier as you progress. Maxwell's anger seems to weaken him; as he becomes more furious, he starts to deform.

In the final level of Adventure Mode, Maxwell, now completely weakened and deformed, is sitting in his throne, tells the player about "them" who brought him and Charlie to the Don't Starve world.

Next to the throne is the Nightmare Lock where the Divining Rod can be placed. If the Divining Rod is put in the lock, the game will ask you if you want to take pity on Maxwell but also that his captors would not be happy about it. When Maxwell is freed from the throne, he gets up and instantly dies, then turns to dust and fades away. Your character is grabbed by Shadow Hands and is placed on the throne, effectively taking Maxwell's place, trapped in the Don't Starve world forever.

After a speech from the game developers, you unlock Maxwell as a playable character in the game.

After his "death", Maxwell reappeared in the wilderness of the Don't Starve world and had been mostly stripped of his powers. Ironically, this made him vulnerable to harm and was now forced to survive the many perils of a world he created. Maxwell eventually found shelter at a seemingly abandoned campsite but was then attacked by Wilson, who was also freed from the Nightmare Throne. The pair stopped fighting after they both realized they're now in the same predicament and Maxwell soon learned from Wilson that Charlie has become the world's new ruler.

Maxwell as he appears as a playable character 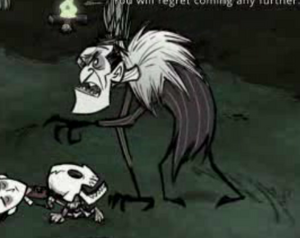 Maxwell deformed in the later chapters of "Adventure Mode"

Maxwell as he appears at the start of a game

Maxwell and Charlie's poster for their Magic act

Maxwell and Charlie performing for the last time, just before they are dragged into the Don't Starve World
Add a photo to this gallery
Retrieved from "https://villains.fandom.com/wiki/Maxwell_(Don%27t_Starve)?oldid=3548130"
Community content is available under CC-BY-SA unless otherwise noted.