Doing whatever he wants to.

Cause anarchy alongside Jacob Frye (formerly).
Kill Jacob Frye alongside with innocent Civilians of London (failed).

Maxwell Roth is one of the two secondary antagonists along with Lucy Thorne of the video game Assassin's Creed: Syndicate. He is an associate of the templar and one of the seven henchmen of Crawford Starrick.

He was voiced by John Hopkins.

Starrick is a criminal mastermind located in London. He is the leader of the Blighters, an organized gang serving as henchmen and brutes for the Templar Order. Roth is a chaotic anarchist that operates after the motto "Why not?", prefering to do whatever he wants without thinking of consequences. Roth is rotten to the core and, despite his theatricality, is a force to be reckoned with.

After the Assassins Jacob and Evie Frye found a gang - the Rooks - to combat the Templar influence in London, they manage to slowly wrest away influence from Roth's Blighters. After the Assassin's have conquered three burroughs from the Blighters, Roth, who has watched the situation with interest, sends a dinner invitation to Jacob Frye. Although Evie warns him not to accept the invitation, Jacob meets Roth at Roth's headquarter, a theatre in the Strands, and sits down with him. Roth congratulates Jacob on his success so far, revealing that he does not hate Jacob for combating the Blighters but actually sees a bit of himself in Jacob and even admires him. He makes Jacob an offer, they will cause a little chaos in London while also hurting Crawford Starrick's empire. Jacob accepts.

Roth then leads Jacob to a nearby rooftop which is on the same level as a railroad bridge. Roth reveals to Jacob that a large amount of nitroglycerine is stored at a nearby train station and that he wants Jacob to blow it up. Jacob accepts, heads to the station, destroys the explosives and hijacks a train, which he drives to the drop off. There, Starrick takes over the train and thanks Jacob for his work. He claims that he needs to be going but invites Jacob back to his theatre for the next step of their plan.

Roth serves as a Psychotic, Anarchistic Gangster whose goal is to create more chaos and destruction across London, at first he is seen as a person who is willing to help Jacob to take down the Templars, but it is eventually shown that he is only using Jacob as an advantage to commit acts of chaos that ends up Jacob getting disturbed about, which ends of having Jacob Betray Roth after they have a argument that 'He can do whatever he wants' and later destroying a factory with child workers in it.

He has also shown to be somewhat obsessed with Jacob Frye, going as far as to burning down his theatre, just for Jacob to make his move. 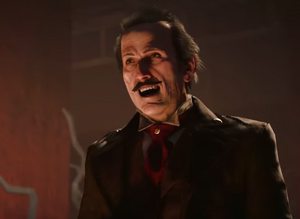 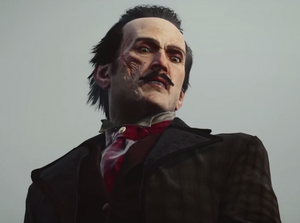 Roth facing Jacob
Add a photo to this gallery 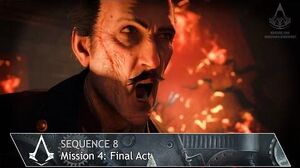 Retrieved from "https://villains.fandom.com/wiki/Maxwell_Roth?oldid=4258274"
Community content is available under CC-BY-SA unless otherwise noted.