A View to a Kill

To assist Zorin in his plans (formerly).

May Day is a major antagonist (later anti-hero) of the 1985 James Bond film A View to a Kill. She was the lover and henchwoman of Max Zorin of Zorin Industries.

She was portrayed by Grace Jones.

May Day appeared to be a strong bodyguard to Zorin and got pleasure out in murdering people that Zorin deemed to be a threat. She also has two associates Jenny Flex and Pan Ho, whom she are very close to.

As such, May Day and her cohorts aided Zorin into initiating his plan to destroy Silicon Valley by setting off the geological lock that would cause the faults to move simultaneously and sink the entire area, which would leave Zorin to gain control of the microchip monopoly. She even helped out Zorin's men in pumping water into them via a vast system of oil wells in order for Zorin to blast through the lake beds to break off the lock with explosives.

However, despite their long intimate relationship, Zorin deliberately betrays May Day and his remaining workers by blowing up the mines to flood and shooting them down to ensure that his plan would succeed. Though May Day survived the attack, she is upset to see that all the workers have been drowned and shot, including Bob Conley, Jenny and Pan Ho, much to her complete shock.

Demoralized by Zorin's betrayal, May Day turned to Bond for help because they were the only two left in the mine who could possibly stop the bomb. The two managed to get the bomb out into a cart, but the break handle is forcing itself. Knowing that the cart can't be able to get the bomb out from the mines by itself, May Day willingly sacrifices herself by holding the handle to ride the cart, telling Bond to get Zorin for her. As May Day finally rides the bomb out of the mine, she accepts her fate as the bomb detonates, killing herself and saving Silicon Valley in the process, much to the horror of Zorin and his remaining henchmen, Scarpine and Hans Glaub.

Honoring May Day's promise, Bond manages to avenge May Day's death by knocking Zorin off the top of the Golden Gate Bridge, where Zorin fell thousands of feet to his watery death in the bay.

May Day driving a speedboat alongside her boss Max Zorin

Zorin attempting to kiss May Day while practicing martial arts

May Day helping Bond transport the bomb out from the mine 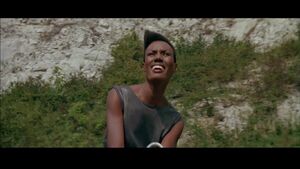 May Day perishing in the explosion.