May Dove Canady is the titular villain protagonist of the 2002 horror film "May".

She was portrayed by Angela Bettis who played Carrie White in the 2002 film.

When May was a child, she was a lonely girl with one lazy eye and without any friend but a weird and ugly doll named Suzie kept in a glass case given by her bizarre mother on her birthday.

May becomes a lonely weird young woman, working in an animal hospital and assisting the veterinary in surgeries and sewing operated animals most of the time. Her lesbian colleague Polly has a sort of attraction for her. When the shy May meets the mechanic Adam Stubbs, she loves his hands and has a crush on him. They date, but the weirdness and bizarre behavior of May makes Adam moves away from her.

Alone, May has a brief affair with Polly, but she feels rejected again when her colleague meets Ambrosia. That night her cat shows more interest in exploring the bathroom than comforting her, causing May to kill her out of frustration. When her doll is accidentally broken, the deranged May decides to build a "friend" for herself, using the body parts of her former acquaintances.

Back at home, May designs her "new friend", Amy, a Frankenstein-esque life-sized rag doll made from Blank's arms, Polly's neck, Adam's hands, Ambrosia's legs, Hoop's ears, and Lupe's fur to substitute for hair. The head and torso are different scraps of fabric stitched together and stuffed. Once the macabre doll is finished, May realizes that Amy can't see her. In a rush of misery, May gouges out her right eye, the lazy one, with the scissors. Crying in pain and bleeding, she puts her eye on Amy's head and begs the doll to look at her. A dying May sees her friend come to life and touch her face lovingly with Adam's treasured hands. May smiles in the end. 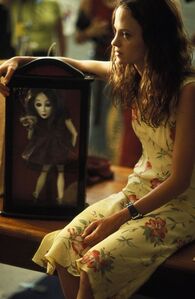 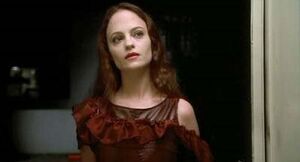 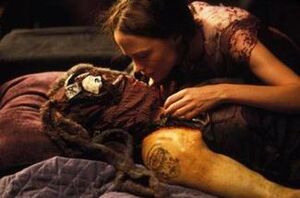 Retrieved from "https://villains.fandom.com/wiki/May_Dove_Canady?oldid=3626263"
Community content is available under CC-BY-SA unless otherwise noted.