Villains Wiki
Register
Don't have an account?
Sign In
Advertisement
in: Minion, Female, Doctors and Scientists,
and 31 more

Atone for her crimes and stop Killian (failed).

Maya Hansen is a major antagonist in Iron Man 3. She was the botanist of Aldrich Killian and helped him in his evil plan.

She was portrayed by Rebecca Hall.

Maye met Tony Stark in 1999 on Switzerland at the new year evening event (the event where Tony met Killian for the first time). Unlike Killian, Maya got Tony's attention and celebrated the New Year. Eventually, Tony left Maya, but not before he gave her the formula which had the potential of fixing the bugs within her Extremis designs. Despite this, Maya became very upset over Tony's departure and teamed up with Killian.

At the present day, she met Tony again and Pepper Potts at Tony's house. There, she wanted to talk with Stark in a personal meeting but after Killian's main henchman Eric Savin arrived to the place with 5 armed helicopters and finally attacked Tony's house and during the assault, Maya fell asleep and woke up after the attack.

Maya and Pepper drove away from the scene, right before Maya confessed to Pepper that she was involved in Killian's attacks by providing the idea and designs for the Extremis virus. At the same time, Killian arrived and kidnapped Pepper before confronting Maya for heading over to the mansion, to which Maya responded that she only wanted to fix the Extremis virus as she was unaware of the fact that Killian wanted to kill Stark.

After Killian takes Tony hostage, Maya soon learns of Killian's true plot of creating an army of Extremis soldiers to take over the United States (with the help from Vice President Rodriguez), even using Pepper as a test subject. Disgusted by this, Maya refused to help Killian and threatens to kill herself by injecting herself with Extremis that would cause a massive explosion unless Killian frees Stark. However, rather than obliging to Maya's demand, Killian instead pulls out his gun and shoots Maya dead. 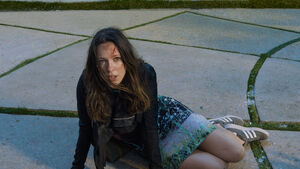 Maya threatens to inject herself with Extremis to Killian.

Maya being shot by Killian.