Maybelle is a minor antagonist in Nickelodeon's 23rd feature film Rango. She is part of the Rodent Clan and a family member of Balthazar.

She was voiced by Patrika Darbo.

Maybelle is a member of the Rodent Clan, though her relation to its patriarch Balthazar is unknown (it is speculated she is his daughter).

When Balthazar, Jedidiah, and Ezekiel seemingly steal the town of Dirt's water supply, Sheriff Rango and his posse come after them and steal the jug back. This leads to Balthazar summoning his family to his aid. He asks Maybelle to give "the holler", which calls all of the hillbillies to action. Maybelle and the rest of the family proceed to chase down Rango and the others in an attempt to kill them and steal back the water. However, it is revealed the jug is empty and someone stole the water before the hillbillies did. Rango arrests Balthazar and his sons anyway and brings them back to town to hang.

However, as Rango discovers the true villain behind the theft, he goes to Maybelle and the Rodent Clan for help. Maybelle is not pleased to see him and points a shotgun at him, but Rango explains that he now knows Balthazar and his sons are innocent, and needs their help to right the wrongs and get their family out. Maybelle and the others agree, and Maybelle heads up a party to go to Dirt and help Rango in his battle against Rattlesnake Jake.

Once there, Maybelle and her family herd their bat steeds into the shape of a hawk to frighten Jake. even when Jake realizes he's been tricked, Maybelle commands her group to stick to the plan of getting Jake to waste all of his ammunition firing at them, which succeeds.

After the true villains are defeated and everything is set right, Balthazar and his sons reconcile with the townsfolk of Dirt, and it is assumed that Maybelle and the others did too.

Maybelle is eccentric and thrill-seeking, and enjoys fighting and hunting down foes. She, like the rest of the family, are loyal to Balthazar and follow his every order. She is not beyond theft and murder to get her way, and will usually do them at Baltahzar's whims. Despite this, she can also be wrathful and serious towards those who wrong her.

However, she does have a sense of honor. Even when facing an enemy that she desires to kill, she asks what he wants first and is shown to be diplomatic. She is also forgiving, as she forgives Rango when he admits he was wrong and even joins him to help save her kin and take back his town. 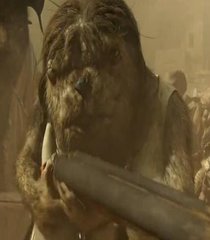