Wealthy Assassin
Maynard John is a minor antagonist in Hitman: Blood Money, appearing in the mission "A Dance with the Devil". He is an assassin sent by the Franchise, hired to assassinate Agent 47 during the Heaven and Hell themed party at the Shark Club in Las Vegas.

Little is known about Maynard John's life prior to his encounter with Agent 47. At some point before Agent 47's arrival, Maynard infiltrated the Shark Club and assumed the identity of a bartender. Taking up a position behind the bar of Club Hell, he served drinks to unwitting guests and used his vantage point to try to spot his target.

According to his ICA profile, Maynard John is a professional and efficient assassin, but "his love of the theatrical makes his job more complicated than it has to be". Upon seeing Agent 47, he made his presence known and challenged him to a duel inside of a soundproof storage room. He talked to Agent 47 in a condescending and arrogant manner, continuously referencing Agent 47's inferiority due to the fact he is a clone. 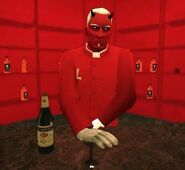 Maynard John behind the bar in Club Hell. 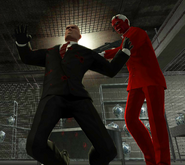 Maynard John killing Agent 47 during gameplay.
Add a photo to this gallery

Retrieved from "https://villains.fandom.com/wiki/Maynard_John?oldid=4258615"
Community content is available under CC-BY-SA unless otherwise noted.