Maynard Odet is the overarching antagonist in the Wrong Turn film franchise and the patriarch of the Odet Family.

He was portrayed by Wayne Robson in WT1 and WT2, then Doug Bradley in WT5.

Not much is known about Maynard's past. He was born on May 2, 1951. He was married to a woman named Delilah and had two children together, Ma and Pa. Maynard is the grandfather to Three Finger, Saw Tooth, and One Eye. His nephews are Brother and Sister. He's the great-grandfather to Three Toe.

At some point in his life, Delilah died from unknown causes. It's unknown if they were related or not, though it's heavily implied that they were since Ma and Pa were deformed, though it also could have also just been from the toxic waste Maynard mentioned to Colonel Murphy that caused the mutations in the first place.

Maynard then finally met his grandsons at the Glensville Sanatorium in West Virginia in Winter of 2003 where they spent 29 years of their life since 1974 since the ages of 8 (Three Finger), 9 (One Eye), and 10 (Saw Tooth). He decided to take care of them himself and move them into the woods of West Virginia.

Some time later, Maynard was caught and arrested for murdering an unknown person sometime before Bloodlines, but escaped prison.

Later that same year on October 31, a group of five friends Billy, Cruz, Gus, Lita, and Julian are on their way to Fairlake Festival when they nearly run over Maynard and they crash into a tree. Maynard lies down on the road pretending he was hit and when Billy, Cruz, and Gus check on him, he assaults one of them with a knife and then gets beaten by them until Sheriff Angela Carter drives up and arrests all four of them.

Maynard spends a majority of the movie in a holding cell, taunting the others and warning them that he should be released while they're still alive. He eventually convinces Lita that if he lets him out of his cell, he'll leave the town with his grandsons and leave her alone. She does let him out, however he betrays her but stabbing out her eyes with his knife that was previously confiscated.

After Three Finger knocks out Sheriff Carter, he ties her up in the same cell he was in with a shotgun taped to her chin. He tells her she can blow her brains out with it or die burning when he sets the building on fire. She chooses the former option.

As Maynard and his grandchildren leave Fairlake county, they find Lita wandering down the road still asking for help. They pick her up without her knowing who they are until Maynard speaks to her and drive off to rape and kill her as Maynard mentioned he was going to earlier.

Maynard is much older in the first movie, possibly ten or twenty years older, and is only a minor character. He shows up at the beginning to warn Chris Flynn to not go into the woods. He later shows up at the end of the movie genuinely surprised when he sees that Chris and Jessie Burlingame had survived, not stopping them when they take his map and leave.

Maynard appears once again but this time in a more antagonistic role. After Colonel Dale Murphy shoots Three Finger into a lake with a shotgun, he makes his way into Maynard's cabin to stitch up a wound he got during his fight.

Murphy and Maynard talk until Murphy asks why Maynard stays in the area if there's dangerous murderers in the area, not knowing he's related to them. Maynard says "I could never leave. Gotta stay close to my youngins!" and then tries attacking Murphy, though he's no match for his military training.

Murphy sneaks a stick of lit dynamite into the back of Maynard's pants before running outside. Maynard chases him but the stick of dynamite blows him up before he's able to shoot Murphy. 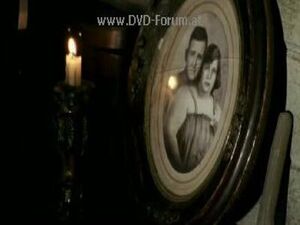 A much younger Maynard with his wife Delilah. 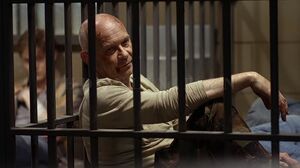 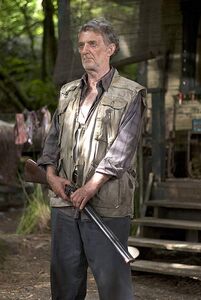 Maynard's demise.
Add a photo to this gallery

Retrieved from "https://villains.fandom.com/wiki/Maynard_Odet?oldid=4123241"
Community content is available under CC-BY-SA unless otherwise noted.