Replace Liberty Park as an amusement park named LibertyLand to make even more money and keep the animals away so they will not interfere (succeeded, for a while).

Have all the animals taken away and eradicated.
Kill Surly for himself so that Libertyland will stay permanently and remain in power (both failed).

He was voiced by Bobby Moynihan.

The Mayor first appears at his evil lair, which is his and Heather's mansion, where he makes a corrupted treaty that fans would know what would happen next. Seeing that Liberty Park never makes money, he plots to destroy the Park and turn it into Liberty Land to pocket more cash. However, the attempt to tear it was eventually sabotaged by Surly after he convinced the animals to fight back. When the foreman of the construction workers reported the Mayor about the animal attacks, Muldoon calls an extermination squad led by Gunther to get rid of the animals.

Later, Surly rescues Precious with help from Buddy, and Precious leaves Frankie behind after he vomited his food. Surly backtracks Muldoon's office and vandalizes his signature bobblehead. Muldoon gets a crossbow, and Surly dodges the shot, only to have Buddy injured and falling off a balcony.

After the Mayor's success in creating Liberty Land, albeit with Liberty Land's name changed to Lie Land due to an electrical failure as a funny way to label the villain, Surly prepares an attack but he does not have enough heroes to defeat the Mayor, Heather, or Gunther. He then proves himself right by evading being tranquilized and rushes to the once-forgotten Mr. Feng and his Shaolin Mice. Surly and Mr. Feng made a comeback and rescue Andie, Mole, Bruisers, Redline, Buddy, and the Chipmunks by ordering an attack on poacher vehicles.

After a surprising comeback, Precious rescues Frankie, who has been scapegoated by Heather. However, Heather found about the plan, but Surly and Buddy use their strength to force the gun to aim at Heather by crawling at Gunther. While Precious' collar blocked one of the darts, Andie did her part in biting Gunther a few times as she, Surly, and Buddy successfully forced the gun to shoot Heather in her diaper. This ultimately caused Heather to frame Gunther for something he didn't mean to do.

Surly and Buddy then rushed to the roller coaster as Muldoon plans to get away and, after successfully landing on the top, Surly started to bite him three times. While Muldoon tried to kill Surly, he did the craziest thing possible by climbing onto the Mayor's magic cane. The Mayor flinched in cowardice by using an umbrella mode for his cane but Surly manages to get his revenge on the Mayor, causing the Texan poacher to fall to a bouncy house. After Muldoon's defeat by Surly, Mr. Feng does his part in revenge (as Surly and Mr. Feng have similar goals). Muldoon managed to get away from the mice, but the police officer he knocked out when he declared the park dangerous arrived. Muldoon is eventually arrested by the police for poaching, conspiracy, corruption, and vandalism along with Heather and Gunther, just before the officer declared LibertyLand closed. With Libertyland shut down for good, Liberty Park was restored to its proper form and so is the animals' home.

Muldoon, his daughter, and Gunter's fates remained in obscurity, but because the police officer who arrested him stated he is going to be away for a long time, it is possible that he was sentenced to life in prison and was also terminated as mayor. As for his daughter and Gunter, there's a chance that she was sent to a juvenile detention center for an uncertain amount of time, and Gunter's prison sentence was never revealed.

At first glance, Muldoon has a surprisingly friendly personality, but his actions speak for themselves, as he is revealed to be a corrupted rich political blight who is equally rich in wealth and seeks only to increase it, not caring if it is at the expense of others. This is shown when he accepted bribes as "campaign contributions" and even hired a deranged head animal control officer to forcibly drive out and remove Liberty Park's animal inhabitants so he could put his amusement park in its place, ordering him to do so at all costs.

He also has a callous disregard for others and does not consider any consequences that might come his way, as he recklessly drove around a traffic jam and used condemned and therefore dangerous as well as faulty rides for his amusement park, which was supposed to replace Liberty Park, and even when his plot had been exposed, he tried to get away from the authorities scot-free, only to end up going to jail anyway. 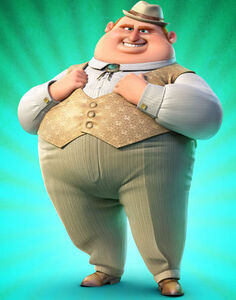