Mayor Sam Bartlett is the local mayor of the town of Shepherd's Glen and a supporting antagonist in Silent Hill: Homecoming, though he is not hostile towards the player - his villainous actions took place prior to the player returning to the cursed town of Silent Hill but nevertheless count as immoral, if not tragic.

He was voiced by David Alan Graf, who also voiced Martin Fitch in the same game.

His great-great-grandfather was a founding member of the town. It's said that, when running for mayor, Sam did so unopposed. This was probably because it was his birth right and his responsibility as a descendant of the Bartlett family, one of Shepherd's Glen's 4 founding families that were once former members of the powerful, local religious cult known as The Order who are based in the neighboring town of Silent Hill. Mayor Bartlett sacrificed his own son, Joey Bartlett to the Order's God and turned to drinking to try and drown out his guilt, however the sinister power of Silent Hill crept into his mind and utilized his guilt to resurrect his dead son as the monstrous Sepulcher, who exacted his revenge on Mayor Bartlett via killing him with a single blow.

Sam was once a respected figure in the community. He was the father of Joey Bartlett, a friend of Alex Shepherd's brother, Joshua. He loved his son dearly, and gave Joey everything he wanted in order to ensure his happiness. During the Shepherd's Glen 150th Anniversary Celebration, Bartlett was the dunkee of the dunk tank.

Throughout the course of the game, it is revealed that Sam buried his son alive as part of a pact inside the atrium of the Grand Hotel in Silent Hill. This decree, placed upon the founding families of Shepherd's Glen by the Order's demonic God, was meant to protect Shepherd's Glen from the corrupting influence that holds sway over the neighboring town of Silent Hill. The Bartlett family was ordered to offer their sacrifice to the earth, hence their children are buried alive.

The mayor is first seen digging up old graves in Rose Heights Cemetery, although his identity is unknown to Alex until a later conversation with Curtis Ackers. It is thought that Sam's act of gravedigging was a way to cope with the guilt of burying his son alive. It isn't until Alex's journeys into the town of Silent Hill that he is actually interacted with. Within the Otherworld's version of the Grand Hotel's atrium, Alex confronts Sam and asks him the location of his brother, Joshua. The answers Alex receives vary on what the player asks, but the end of the conversation, and ultimately the end of the story, remains the same.

Not receiving a straight answer to his liking, Alex presents Sam with the broken watch he found in the Bartlett mausoleum and asks him about his son, Joey. According to Alex, Joey and Joshua were friends, and the two may be together. Sam takes the watch and tosses it to the ground in drunken disdain, where it is absorbed by the soil. The entire atrium begins to shake and Sepulcher, a demonic manifestation of Joey Bartlett, appears. Sam begs for mercy, but is crushed to death. 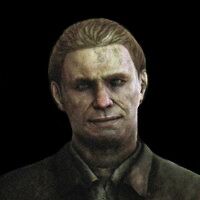 A concept art of Mayor Bartlett.