Become the most famous mayor.

Mayor Susano Shelbourne is the secondary antagonist of the Cloudy with a Chance of Meatballs franchise.

He first serves as the main antagonist of Sony Pictures Animation's third feature film Cloudy with a Chance of Meatballs and its video game adaption and a recurring character in its prequel series.

In the film, he was voiced by Bruce Campbell, who also played Evil Ash in the Evil Dead franchise, Carl Greig in Icebreaker, Himcules in My Life as a Teenage Robot and King Edmund in Rapunzel's Tangled Adventure. In the video game, he was voiced by James M. Connor. In the series, he was voiced by Seán Cullen.

Mayor Shelbourne at first appears to be a kind, healthy and salubrious mayor, but later on in the film, he is revealed to be a greedy, voracious, acquisitive, materialistic, and gluttonous mayor who ends up weighing the size of a hot air balloon.

He is also shown to be cunning and manipulative towards Flint, using Flint's insecurities to have him continue the FLDSMDFR rain down food, despite the potential threat of bigger food. Eventually, when the raining food becomes too big, Shelbourne is quick to blame Flint for it despite the fact that it was mostly the former's fault, turning the townspeople against Flint until Earl stands up for him.

When the people are forced to flee out to sea to avoid the giant food threat, he holds the people back with an "important announcement" so that he can steal a food boat to evacuate the island, much to the citizens' anger, showing a callous and cowardly side to him. In the end, his gluttony would be his undoing, as when Shelbourne got on his food boat, he started eating it and when he was seen in the final scene, he had eaten it to the point that he was stranded at sea, only having a nearly-eaten mast to keep him afloat, and even then, he continued to consume what little part of the flotation device he still had left.

Mayor Shelbourne has no special powers, but when Flint' invention, the FLDSMDFR, began producing food from the sky, he developed an endless appetite, even when he gained several pounds and became morbidly obese (and had to ride a scooter to get around), and his constant appetite for food doesn’t even make him burst.

Despite his obesity, he shows a little fighting style, as seen when he tried to pull Flint away from deactivating the FLDSMDFR around the neck with a shrimp, and attacking him with a radish.

Mayor Shelbourne was originally very healthy and salubrious, weighing probably not much over one-hundred pounds. He eventually plots with his minion Brent McHale that he would be big enough to conquer Swallow Falls. After the "food weather" began (thanks to a certain machine created by Flint Lockwood, called Flint Lockwood's Diatomic Super Mutating Dynamic Food Replicator, or FLDSMDFR for short), he became extremely acquisitive and gluttonous; eating three cheeseburgers in one bite, stuffing his mouth with bacon, and shoving an over-mutated hot dog (with scoops of ice cream) down his throat are just a few examples of his ravenous and acquisitive behavior.

Later in the film, Shelbourne gained hundreds of pounds in less than a month and became a very obese mayor after greedily consuming large helpings of food, and he had to move about on a scooter. He comes to Flint’s laboratory unexpectedly and orders Flint to order pasta and some light appetizers. But as Flint tries to explain the dangers of the food becoming larger, the Mayor dismisses this, and explains that everyone will love the big portions of food. He then manipulated Flint into keeping the machine going, or by turning it off, he will ruin everything and no one will like him at all.

Without any other choice, Flint starts the big food supply, much to the Mayor’s delight. Unbeknownst to them, the machine starts going into overdrive. He and the Mayor create a food park, and an all-around-the-world opening to people all across the world. Just as Flint is about to appear on stage, Sam Sparks tries to warn Flint of the upcoming food disaster, but he dismisses her and appears on stage. As Flint begins to open up the food park for everyone and a spaghetti tornado starts to form, Shelbourne instantly leaves and secretly sneaks into Flint’s laboratory and starts making more orders to the machine, putting everyone in danger.

Flint then realizes his mistake, and rushes to his laboratory to shut down the FLDSMDFR to stop the storm, only to find Shelbourne sabotaging his machine. Unfortunately, Shelbourne refuses to let him do so and attacks Flint with a giant radish, accidentally destroying the communication device to the FLDSMDFR after mindlessly ordering a "Vegas' style all-you-can-eat buffet", causing the machine to become self-aware and start up the major food storm.

When the town of Swallow Falls became showered by huge food, the Mayor (who was now responsible for causing the FLDSMDFR to be evil and creating the major food storm) puts the blame on Flint, causing the townspeople to turn against Flint, but police officer Earl arrived to the rescue, stating that the events would not have happened if the whole town (mostly the Mayor) had not pushed Flint into making so many food orders in the first place. Shelbourne then escapes on a sandwich boat, leaving the townspeople and the town to their fate, though they ultimately managed to survive by staying ahead of the food. At the very end, as Flint finally managed to apparently destroy the FLDSMDFR and end the food storm for good, Shelbourne was seen clutching on the sinking remains of his boat in the middle of the ocean after eating it.

During the ending credits, it is revealed that Shelbourne was eventually found, floating in the air like a hot air balloon with Brent riding on him, eating clouds before being deflated of all of his extra pounds and returned to his original weight, and before being arrested by Earl for his greedy and materialistic actions. However, taking advantage that Earl and his son, Cal became distracted for a moment, where he escaped by jumping into a hole. 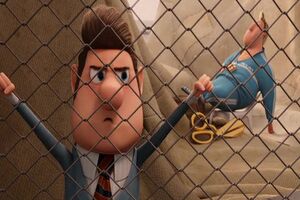 "I wanna be big. I want everyone to look at me and say, "That is one big mayor"." 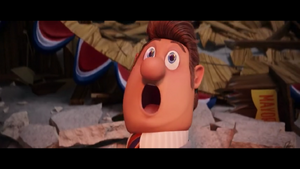 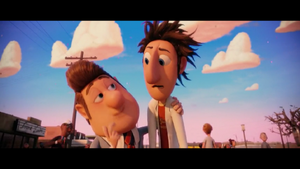 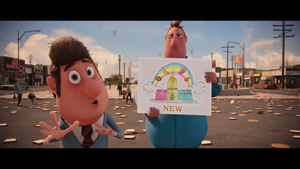 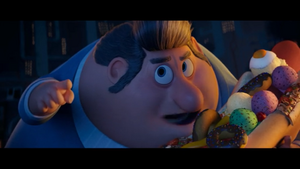 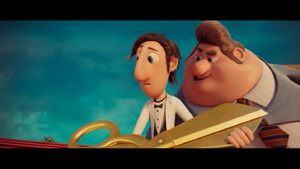 Flint is gag by Mayor

A Vegas Style All You Can Eat Buffet 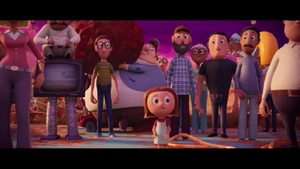 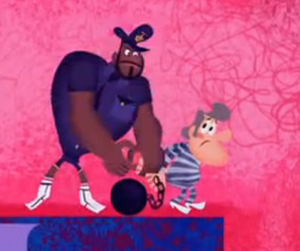