Get rid of the creature in the sewers in order to improve his chances in the next election (all failed).

The Mayor of Trovitopolis (in Japanese: ビッグシティの市長, Mayor of Big City) is the main antagonist in the anime episode "The Mystery Menace" of the Pokémon anime series.

The mayor is a rather intelligent, cunning, manipulative, selfish and dishonest man. He's the typical corrupt official who only wants to be elected and continue to lead the town, even if this mean getting rid of harmless creatures (or, in this case, Pokémon). He's also egocentric, as he started to rise a cult of his personality, since he created statues in his effigy. He's also a coward who can't face dangers himself and always uses his henchmen to do the dirty works. In addition, when he was a child, he was presumably very harsh trainer since he desperately wanted his Bulbasaur to evolve into Ivysaur, and when it didn't happen quick enough, he callously dumped his Bulbasaur in the sewers and abandoned it without second thought, not caring about his Pokémon in the slightest. Even after reuniting with his Bulbasaur he still wanted to have nothing to do with it, completely disregarding the fact that it was still loyal to him.

Little is known about the youth of the mayor, but it is heavily implied that he was very arrogant and selfish child. He became a Pokémon trainer and received (or captured) a Bulbasaur. But instead of caring for it, he mainly focused on getting Bulbasaur evolve into Ivysaur. When evolution wouldn't happen quick enough, he angrily abandoned it in sewers, claiming that it was useless to him.

Afterwards, he gave up on Pokémon training and went into politics, eventually becoming Trovitopolis' mayor. However, recently, rumors of a mysterious creature from the sewers using its tentacles to steal peoples' food began surfacing. Desperate to maintain his position, the Mayor was willing to do whatever it took to keep these rumors down.

While Ash and his friends were heading through Trovitopolis on the way to Trovita Island, they landed in the sewers after one of Team Rocket's attempts to steal Pikachu went wrong. The Trovitopolis Officer Jenny found them down there after Ash's Bulbasaur got kidnapped by a mysterious creature. After Ash and his friends got out of the sewers, they were locked in jail. The mayor wanted to get rid of the creature in the sewers so he could get re-elected, and hired a personal SWAT team to carry out his needs by guarding every sewer entrance in the city. However, after sealing all the exits in the sewers, it turned out that mayor was much more concerned about getting re-elected than what was going on down below.

As Ash and his friends were looking for Bulbasaur, Misty and her Togepi got captured, too. It later turned out that Bulbasaur which was twice its normal size was the creature wreaking havoc. It was lonely after being abandoned by the mayor when he was a child and was looking for someone to keep it company. Ash, Misty, and Tracey then showed the whole town that the monster was the Bulbasaur that the mayor previous owned, after the pipes got backed up from the concrete-sealed sewer exits and flooded Trovitopolis City Hall.

The mayor revealed the fact that he abandoned the Bulbasaur because it wouldn't evolve. He angrily decided to punish Bulbasaur for not evolving. After hearing what happened, the townspeople were shocked and refused to vote for him. Misty demanded the mayor an apology, but he refused, feeling no remorse or regret for abandoning his Pokémon (even though his Bulbasaur was glad to see him after all). He was put away and the town's Nurse Joy agreed to take care of the Bulbasaur. 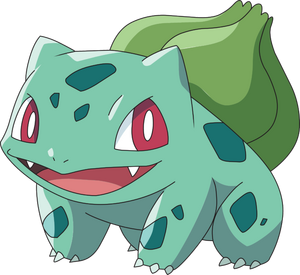