Molesting and abusing his stepdaughter (formerly).

Mayu's Stepfather is a minor antagonist in the manga and anime series Elfen Lied. He is the nameless stepfather of Mayu. He is among the only Humans in the series who is neither superhuman nor specially equipped. Yet for all that, he and his wife do a horrendous amount of damage to a well-liked character.

Mayu is a young girl, roughly twelve when we are introduced to her. She is homeless, staying in a woodpile shelter on the beach at Kamakura, in the company of her only friend, a small dog she names Wanta. As her life begins to cross paths with those of Nyu, Kouta and Yuka, she is offered better accomodations at Maple House, a former restaurant and inn where they all stay. As she fled them partly out of mistrust, she recalled her past.

The fate of her birth father is never revealed or hinted at. Her mother marries a man who quickly begins to sexually abuse Mayu, sometimes to the point of sodomy. When she could bear no more of this, Mayu finally broke down and told her mother. Her mother revealed depths of coldness and detachment that shocked Mayu, and told her she now regarded her as an "obstacle to her marriage", and that if she were to disappear, she wouldn't care. During the next rape attempt by her stepfather, a despondent Mayu fled with only the clothes on her back, making her way to the Kamakura Beach area by Enoshima Park. It was there she found Wanta, as well as a kind merchant who gave her what scraps of food she could.

In one savage stroke, the beach, the food scraps and Wanta were all taken from her as options to live the miserable but reliable life she had. In despair, she went to those at Maple House, and was not only greeted warmly, but got Wanta back, the small dog having fled a woman who claimed to be its true owner in order to be with Mayu. After some reluctance, Mayu allowed Kouta and Yuka to contact her mother, who signed her custody over to the college-age couple without blinking or a second thought, an act that made them suspicious, but as a courtesy to Mayu, they asked no more of it.

The series never mentioned what happened to him and Mayu's mother, or whether or not he remained married to Mayu's mother, as his possible true intentions of marrying her are ruined when Mayu flees from the house. The mistrust and suspicion this man brought about in her caused Mayu to mistrust even Kouta for a time, but this young man proved equal to the task of being her new, better father.

The Stepfather and his wife's fate were left unknown after Mayu had her freedom and free from her abuse. 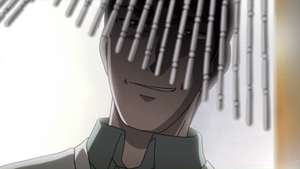