Me-Positive and Me-Negative are supporting antagonists of the Phineas and Ferb episode "Sidetracked". They are two magnetic robots built by Professor Bannister of the Bannister Evil Enterprises to take on his enemies.

During the episode's climax, Bannister was confronted by his nemesis Lyla Lolliberry and her partner Perry the Platypus on his helicopter, where he reveals his plot to steal Canada's symbol of national unity (Albert the Moose) to sink Canada's national pride to a new low and allow him to annex Canada to Greenland and put in a new national anthem in order to reinvigorate its national pride to a peak. He even got Heinz Doofenshmirtz to assist him in his scheme as part of their U.S.-Canadian evil scheme exchange program, though Doof finds Bannister's scheme to be quite complicated in general.

Anticipating that he would be confronted in person, Bannister reveals his new creations known as Me-Positive and Me-Negative to the agents, revealing that he got the parts from several thugs (who stole the parts from a warehouse in Seattle earlier in the episode) to create the robots. Feeling that his plan is at its peak, Bannister happily set his two robots to fight the agents. At first, the robots had the upper hand, but Perry tricks Me-Negative into chasing him onto the top of the chopper while Lyla stands her ground against Me-Positive inside the chopper. Lyla then lures Me-Positive into the ceiling, where its magnetic field clings onto that of Me-Negative, trapping the two robots on the chopper's hull. Horrified by this turn of events, Bannister attempts to escape via parachute, only to be caught by Peter the Panda (whom Perry called for backup).

It is unknown what has happened to the androids following the arrest of Bannister and his thugs, though it may be presumed that were deactivated afterwards. 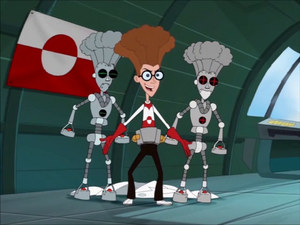 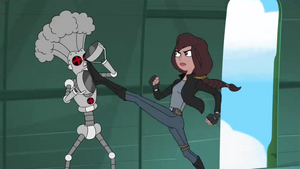 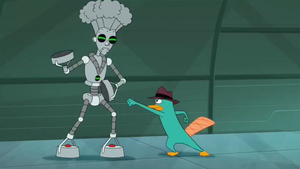 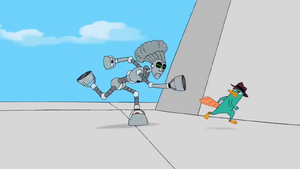 Me-Negative running after Perry on top of the chopper. 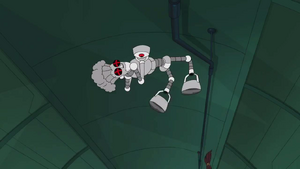 Me-Positive being defeated after being lured into the hull by Lyla. 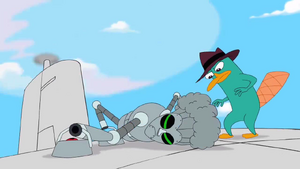 Me-Negative being defeated being pulled by Me-Positive's magnetic field.
Add a photo to this gallery

Retrieved from "https://villains.fandom.com/wiki/Me-Positive_%26_Me-Negative?oldid=3772707"
Community content is available under CC-BY-SA unless otherwise noted.