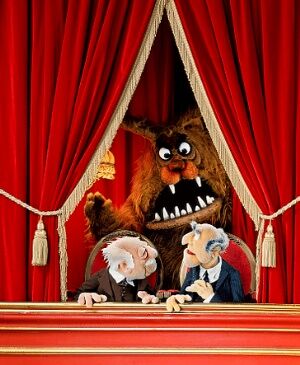 Mean Mama is a voracious brown monster who debuted on the "Beast of the Week" sketch on the Don Knotts episode of "The Muppet Show", where she protected her baby from Don Knotts. She is one of the few explicitly female monsters on the show and has been performed by Jim Henson, Frank Oz, Jerry Nelson, Richard Hunt, Dave Goelz, and Louise Gold.

Mean Mama has been known to fans for years as "Big Mama," the name she was called in several UK publications, including the Muppet Show Annual 1979, The Muppet Show Diary 1979, and a December 1978 interview with Louise Gold in Look-in Junior TV Times magazine. However, her name was never used in a Muppet production, and internally, the Muppet Workshop referred to her as "Mean Mama".

Mean Mama is unique among the monsters in that she has appeared in both full-bodied and hand-puppet versions. She first appeared as a hand-puppet, with the full-bodied version debuting in the Julie Andrews episode.

Although Mean Mama is unquestionably female, her gender is sometimes emphasized more strongly, depending on the sketch. At times, she has been adorned with long eyelashes, a sundress, and bosoms (as in the Leslie Uggams episode). In "The Muppets Go Hollywood", she appears in the "Hooray for Hollywood" production number in a deep purple gown, with a matching bow in her hair and a feathery black fan. In other appearances, the puppet would lose all its feminine accoutrements and become more masculine in appearance and voice.

In 1977, Mean Mama made an impression at the Royal Variety Performance while greeting the Royal Family. Louise Gold was performing Mean Mama—and instead of shaking hands with Prince Charles, she gave him a hug.

In Mean Mama's final appearance on The Muppet Show, in the Carol Burnett episode, she appeared as an alien in a "Pigs in Space" sketch. At the end of the sketch, she swallowed First Mate Piggy whole—but because the cast was in the middle of Gonzo's dance marathon, Piggy had to keep dancing while inside the alien's gullet.