Mean Steve first appears as a regular key in the Mayor's Office. When taken home, he immediately turns into an anthropomorphized one. When asked if he knew where the mayor is, he immediately redirects the conversation to the Town's security and claims to be the city key.

He starts singing a song about the town's supposed high crime with the various things criminals supposedly do, such as "hiding in the garden" or "renting you a function room". With all statements made being only indirectly related to or unrelated to actual crime. This was because the song is just a ploy of his to bait Duck Guy and the whole town into accepting him as their supposed "new mayor".

As the new mayoral right hand, He gas lights Duck Guy into turning the town into a more "secure" version of itself by locking their doors, bolting their windows, and burying their gems. When Yellow Guy comes by to celebrate his birthday. He throws his puppy into a vat of acid because it was a security violation. With Yellow Guy saying he hates his "metal brother", with steve quick to remind him he's a key, which is a running gag throughout the episode. After this, he convinces Duck Guy that everyone in town hates him, eventually turning him into a grotesque monstrosity hooked up to a surveillance system so he can become the new mayor. Once the others find out about this, his plans are foiled. It's found out he's not the actual key to the city and his real name is "Mean Steve". After his defeat, the real mayor takes office once more.

His appearance is that of an anthropomorphic two-hole key. His body features a pencil mustache and a bisect trapezoid-like pattern towards the legs. As for clothes, he wears white gloves and black shoes.

Like his analogous counterparts, he too comes off as arrogant, dismissive, and short-tempered. All while mostly rhyming like a certain talking clock. Though on the contrary where the other so-called teachers try to teach Roy's lessons he's motivated by self-interest in power.  When he's alone with Duck Guy, he changes gears and starts acting strangely nice speaking in a soft voice with polite nicknames such as "mister mayor." Though in reality, this is just him trying to get on Duck Guy's good side.

Like with all of the bad teachers there is some symbolism behind him as well. Due to him being obsessed with security and taking drastic & selfish measures because of it. He could represent systematically surveillance, censorship, and authoritarianism. 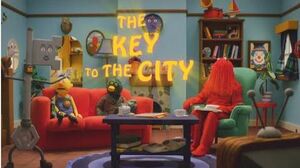 DHMIS - The Security Song
Add a photo to this gallery

Retrieved from "https://villains.fandom.com/wiki/Mean_Steve?oldid=3758831"
Community content is available under CC-BY-SA unless otherwise noted.