During Halloween Horror Nights: Ripped from the Silver Screen's house Leave It to Cleaver, Sam Meetz arranges for people to be captured and chopped up to serve as meat in his butcher shop. Aiding him are employees dressed up as his business' creepy mascot Meaty Meetz. This also serves as an effective scare tactic, giving the impression that one Meaty Meetz is pursuing victims until it's too late.

Many of the employees who work for Meetz Meats don this garb as their standard uniform. On the surface, Meaty Meetz appears friendly and cheerful, giving the business a happy demeanor. However, behind the scenes, those who don the attire are just as deranged as their boss.

Employees donning the Meaty Meetz costume aid Meetz in rounding up various people around the city of Carey, Ohio. Among them, they attack the homeless and the lawbreakers, effectively "cleaning" their town by killing them and repurposing them as meat products. The products sold well enough to continue their murders. It is unknown what many of the employees look like under the masks.

They also appear to be torturers of a sort, given the house's feature of humans locked away in cages. In the queue video for Leave It to Cleaver, people are seen hanging in the warehouses, only to be cut off by Sam Meetz and the Meaty Meetz employees shutting the doors on others preparing them. True to form, these people are often disembered and cut up in the same vein as cattle. Disturbingly, the facility is shown to have a children's learning center where the employees' children are taught to act like Meaty Meetz. One promotional image for the house also featured a policeman and an old woman wearing Meaty Meetz masks, possibly suggesting that there may have been other Meaty Meetz outside the workplace.

One notable Meaty Meetz is the fat cousin of Sam Meetz himself. Said cousin would appear at the end of the house and attack guests as they fled. 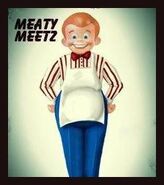 Sam Meetz with Meaty
Add a photo to this gallery

Retrieved from "https://villains.fandom.com/wiki/Meaty_Meetz?oldid=3460945"
Community content is available under CC-BY-SA unless otherwise noted.