To help Professor Parenthesis take over O.W.C.A. by taking control of all of its animal agents to do his bidding and wreak havoc across the world (all failed).

The Mecha-Fleas are the secondary antagonists of the 2015 Disney Channel TV special O.W.C.A. Files, based on the Emmy-Award animated series Phineas and Ferb. They are a group of robotic fleas created and designed by the infamous Professor Parenthesis to help him take over O.W.C.A. by taking control of all of its animal agents to do his bidding for him.

The Mecha-Fleas first appeared when all of O.W.C.A.'s animal agents started itching (even wearing specialized flea collars). Carl spotted one of the tiny Mecha-Fleas and explained this to Monogram, who wonders what kind of freak would build tiny robotic fleas. It was then Professor Parenthesis appeared on a hologram, explaining that he was responsible for putting the Mecha-Fleas inside the collars so that they can latch on to every animal agent's neural system as part of his true plot to take over O.W.C.A.. With a specialized remote, Professor Parenthesis activates the tiny Mecha-Fleas to take control all of O.W.C.A.'s agents, forcing Monogram and Carl to hide away from sight.

A group of giant Mecha-Fleas appear when Perry and his team (including the former evil scientist Heinz Doofenshmirtz) fly over to Parenthesis' lair located in the Grand Canyon. They started attacking the agents, who then fight back before forcing themselves to jump into the canyon water to evade their hovercraft, which then crashes into one side of the canyon and destroys several of the Mecha-Fleas. Despite the setback, Parenthesis managed to confine Perry and his team in a death trap and heads off with his four remaining giant Mecha-Fleas (all of them named Susan, Jim, Tracy, and Connie) to O.W.C.A.'s headquarters to finalize his plot. Fortunately, Doofenshmirtz (who remain outside the lair during the agents' infiltration) rescued the agents before escaping with them from Parenthesis' exploding lair.

Meanwhile, Monogram and Carl are finally caught by the mind-controlled agents just as Parenthesis and his giant Mecha-Fleas arrive to the scene. As Parenthesis gloats over the success of his plan, he states that once the Mecha-Fleas completely override the agents' natural instincts in 6 minutes, he'll be having the mind-controlled agents to wreak havoc across the world to smear O.W.C.A.'s good name to the world. Perry eventually arrives and beats down the giant Mecha-Fleas before kicking Parenthesis in the face. However, fate takes a turn when Parenthesis turns out to be a android being controlled by his true form: a tiny blue flea. Despite the ambush, Parenthesis was still able to get the mind-controlled agents to take Monogram and Carl pursue while he and the giant Mecha-Fleas pursue Perry throughout the training grounds. Fortunately, Doofenshmirtz and the rest of the trainees manage to set up a trap for the parasites (per Perry's instructions), and Karen the Cat manage to destroy the giant Mecha-Fleas. Despite the setback, Parenthesis gloats that his control over the agents will be permanent in 5 more seconds thanks to his remote, but a household fan falls on Parenthesis' android (thanks to some talking bugs, who were using the fan to fly their paper plane up to the top of O.W.C.A.'s headquarters to enlist themselves as new recruits throughout the entire special). This causes both Parenthesis' android and the remote to be destroyed, permanently disabling all the remaining Mecha-Fleas and freeing all the animal agents from Parenthesis' control.

With the Mecha-Fleas destroyed, Doofenshmirtz easily captures Parenthesis with a pair of tweezers and places him inside an enclosed pill bottle held by Perry. 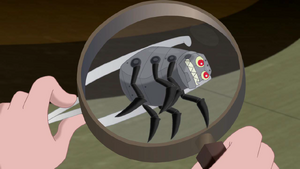 A tiny Mecha-Flea is spotted by Carl. 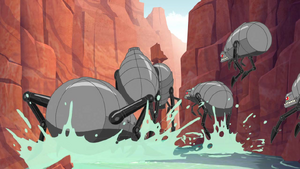 Several giant Mecha-Fleas chasing down Perry and his team through the Grand Canyon. 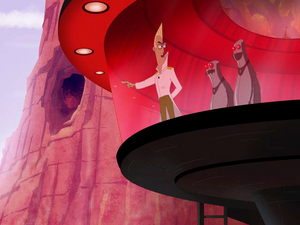 Parenthesis dispatching two Mecha-Fleas (both named Jason and Shirley) to check on the water fountain that has been drained from the hole. 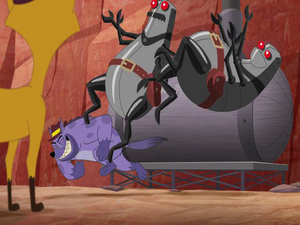 Jason and Shirley being taken down by Harry the Hyena. 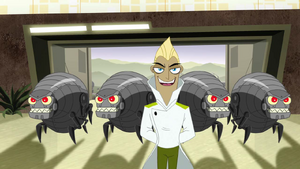 Four giant Mecha-Fleas (all named Susan, Jim, Tracy, and Connie) follow their master as they infiltrate into O.W.C.A. HQ. 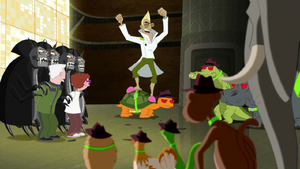 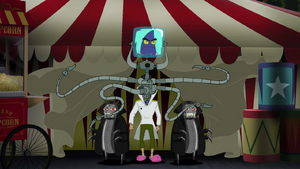 Parenthesis and the giant Mecha-Fleas search around the O.W.C.A. training grounds to capture Perry. 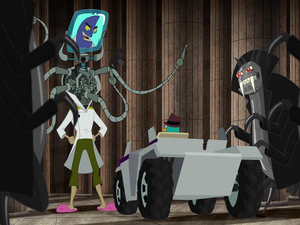 Parenthesis and the giant Mecha-Fleas temporarily cornering Perry in an ancient ruin simulation. 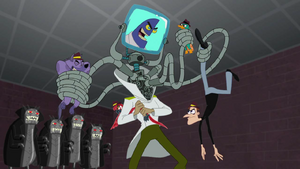 The giant Mecha-Fleas watch as Parenthesis manages to capture Perry and his team (including Dr. Doofenshmirtz). 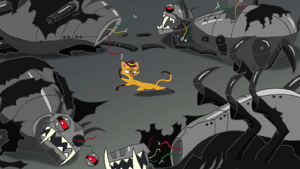 Susan, Jim, Tracy, and Connie are destroyed by Karen the Cat after their failed attempt to kill her, much to Parenthesis' anger. 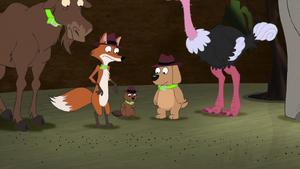 All remaining Mecha-Fleas are permanently disabled following the destruction of Parenthesis' remote, freeing all agents in the process.
Add a photo to this gallery

Retrieved from "https://villains.fandom.com/wiki/Mecha-Fleas?oldid=3772705"
Community content is available under CC-BY-SA unless otherwise noted.