Learn all Pokemon attacks in order to help Giovanni rule the world (abandoned).

Destroy itself in order to prevent it from being used for evil (succeeded).

MechaMew2 is the secondary antagonist in Pokemon Live!, a musical stage version of the anime. It is a robotic copy of Mewtwo created by the criminal mastermind Giovanni that can learn and amplify any Pokemon attack.

After his plot to use Mewtwo to conquer the world failed due to the Pokemon having more power than he could control, Giovanni constructed MechaMew2, designing his creation so that it could learn and amplify any attack used against it.

Planning on getting his creation to learn every Pokemon move so he could conquer the world, Giovanni then held a contest and promised the rare Diamond Badge to any Trainer who could defeat MechaMew2. The real Mewtwo eventually appears, and performs an unknown attack. Giovanni commands him to learn it, and MechaMew2 turns on him. He grabs Giovanni by the neck, and self-destructs after saying he could never let his creator's evil deeds continue.

The explosion later destroys the building as Mewtwo, Ash, and Pikachu escape. When Ash asks about the attack, Mewtwo explains that he put Ash's happy memories into it, and he learns about friendship and love.

As an artificially manufactured Pokémon, MechaMew2 is likely genderless.

MechaMew2 is able to learn any attack and amplify its power, and by the end of Pokémon Live! it had learned every move as of Generation I. This ability allows it to know more than four attacks at once, making it the only Pokémon who can do so. After seeing Mewtwo's special attack of love, caring, and friendship, MechaMew2 learns the ability of speech, and possibly freewill, allowing it to rebel against Giovanni.

MechaMew2 never made an official appearance in the Pokémon Trading Card Game; however, a promotional card was given out to attendees of the performance. The card is 7" tall by 5" wide, making it slightly smaller than the jumbo-sized Pokémon cards. The backside of the card features the Pokémon Live! logo, instead of the standard TCG card back; this was likely done to show its non-compatibility with the Trading Card Game.

This mechanical marvel was created by Giovanni, the diabolical leader of Team Rocket. It has the power to learn, then amplify and return, the attacks of any Pokémon it meets in battle, making it virtually unstoppable. To insure that MechaMew2 learns every type of Pokémon attack, Giovanni lures trainers to battle him by offering the one-of-a-kind Diamondbadge to whoever can defeat him. 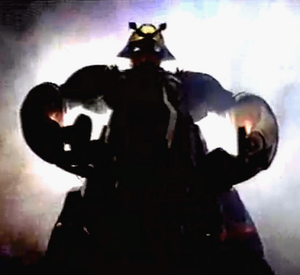 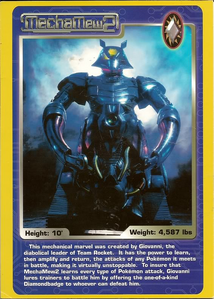 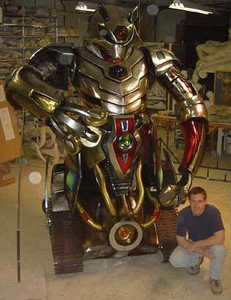 Front View of the Backstage Photo 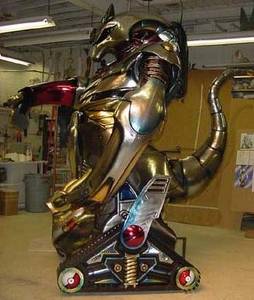 Side View of the Backstage Photo 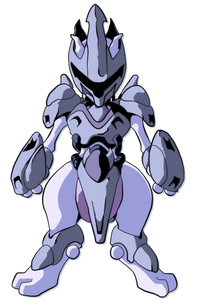 The Inspiration of MechaMew2 - (Mewtwo's Armor)