Creation and servant of Di Lung

To permanently replace Courage as the new pet for Muriel and Eustace Bagge (failed).

Mecha Courage (sometimes spelled "Mecha-Courage") is a robot dog who was created by Di Lung to replace Courage and a villain in Courage the Cowardly Dog. He appeared as the titular central antagonist of the 2nd episode "Courage vs. Mecha-Courage" of season 3 of the series.

Di Lung did not think that Courage was a good enough dog for his owners Eustace and Muriel. So he designed Mecha Courage as the perfect pet for the couple. Courage didn't like it one bit. Mecha Courage kept doing nice things to Eustace.

Courage and his robot counterpart fought in a gladiator match in an arena resembling the Roman Colosseum. Mecha Courage kept beating Courage up using the same weapons, only stronger and more destructive. Courage eventually won because he endured all of its attacks until he ran out the machine's batteries. 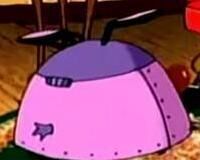 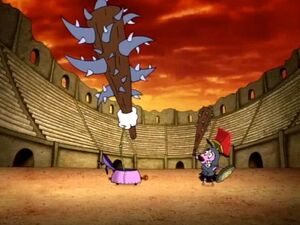