Second-in-command of the Eggman Empire (formerly)

Attacking anyone and anything that stands in his way.

Fighting.
Combating against both Sonic and Knuckles.

Steal and absorb the mystical powers of the Master Emerald.

Destroy both Sonic the Hedgehog and Knuckles the Echidna (failed).

Mecha Sonic Mk. II is a recurring antagonist in the Sonic the Hedgehog franchise, serving as one of the two secondary antagonists of the videogame Sonic & Knuckles along with the Prime EggRobo, and arguably the overall secondary antagonist of the combined adventure Sonic the Hedgehog 3 & Knuckles. He appears as a major antagonist in Sonic's story, and one of the two main antagonists (alongside the previously mentioned EggRobo) of Knuckles' story. He is the second robotic replica of Sonic created by Dr. Eggman, the first being Silver Sonic.

Unlike Silver Sonic, who had more of a bulkier, rough appearance, Mecha Sonic has more of a sleek, thin appearance, with large gauntlets and a visor. His color scheme is also closer to the real Sonic himself, having a dark shade of blue and red "shoes". When he curls into a ball, he becomes a spiky, sharp ball.

Like Silver Sonic, Mecha Sonic is programmed with an obedient personality. He is a cold and silent predator who is willing to take orders without hesitation.

Mecha Sonic made his debut in Sonic and Knuckles, where Sonic fought him three times at Sky Sanctuary while tracking down the Death Egg. The first time Mecha Sonic was in a pod similar to Eggman's Eggmobile, using a ball and chain. The second battle was similar to a few previous Eggman battles with metallic eggs circling him. The third battle he faced Sonic head-on, using jump and dash attacks, but Sonic defeated Mecha Sonic, supposedly killing him.

However, when Knuckles arrived at Sky Sanctuary sometime after the Death Egg was destroyed, Mecha Sonic was revealed to still be alive. Aiming for Knuckles, he destroyed the Egg Robo that took Eggman's place during Knuckles' playthrough and fought Knuckles the same way he fought Sonic in their third battle. Knuckles defeated Mecha Sonic, who absorbed power from Master Emerald to turn into a super form. Knuckles was still able to defeat Mecha Sonic, completely destroying him.

In the bad ending of Sonic and Knuckles, He was shown in a post-credits scene recovering from damage and absorbing power from the Master Emerald; however, this was likely just a representation of the battle between him and Knuckles, as he was shown to be completely destroyed after the battle and does not appear in any later games, replaced by the more infamous Metal Sonic.

Robotnik managed to have Sonic captured by Nack the Weasel and roboticized and took control of Sonic. Mecha Sonic, as he was called, was sent to Knothole, where he managed to defeat both Bunnie Rabbot and Knuckles, and continued to wreak destruction on the village, until the Freedom Fighters were left with only one option. In the Mecha Madness super-special, Knuckles roboticized himself, using a neural overrider to retain his will. Mecha Sonic and Mecha Knuckles fought to a standstill until they were both sent spiraling towards Robotropolis, where their impact caused a nuclear explosion which severely damaged Mecha Sonic, and would have killed Mecha Knuckles had it not been for Sonic's regaining his will and throwing himself in front of Knuckles at the last minute. Afterward, Nicole managed to de-roboticize Sonic with the help of the magical protection conferred to him by his recently acquired one-billionth power ring.

Mecha Sonic was able to fly and hover using thrusters in his shoes. He had hyper jet boosters, teleportation, laser blasts, twin wrist lasers and dramatically increased strength, and his computer brain gave him digital tracking and allowed him to do complex mathematical calculations in seconds. Mecha Sonic stood at 130 cm and weighed 170 kg.

Mecha Sonic reappeared for one issue when Sonic and Tails were robotized by the Bem to fight Dr. Robotnik and Snively (who had been transformed back into organics) in an experiment to determine whether or not organic Mobians were superior to roboticized ones. Sonic and Tails won the battle and were reverted to normal afterward.

Mecha Sonic makes a brief appearance in Lego Dimensions as a boss. After defeating Silver Sonic (who is referred to as Robo Sonic), Mecha Sonic appears in the second phase of the battle. His attack pattern is mostly the same as Silver Sonic, but sometimes he will briefly fly up in the air and shoot projectiles at Sonic. Once he is defeated, Metal Sonic will take his place in the third phase. 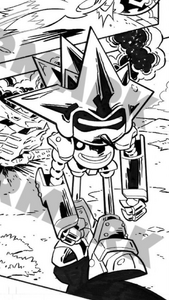 Mecha Sonic in the cancelled #291 issue of Archie's Sonic the Hedgehog series. 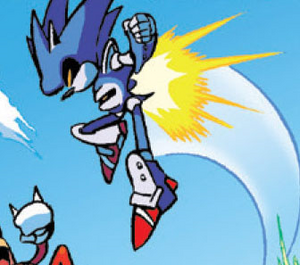 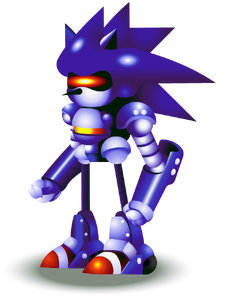